The Uffizi Gallery is among the most famous collections of Renaissance artwork in the world. From Botticelli's - Birth of Venus to Leonardo da Vinci's - Annunciation to Michelangelo's - Doni Tondo. Wander through the development in panting from Byzantine to Renaissance, witness a variety of deities and experience numerous religious cultures.

Birth of Venus by Botticelli

Dating back to 1485, the Birth of Venus is one of Sandro Botticelli’s most famous pieces. This painting depicts the goddess of love and beauty arriving from sea where she was born of the sea foam. The story goes as so; the God Uranus was overthrown by his son Cronus who castrated him and threw his genitals into the sea, this caused the water to be fertilized, of which Venus was born. In the painting, the goddess is carried by the winds, “Zephyr” and “Aura” until she is met by a young woman who is identified as one of the Graces, or the Hora of Spring. The Hora of Spring embraces Venus with an open blanket to portray the frailty of life and love, how it takes care for a seedling to blossom into a tree, just as it takes nurturing a connection to become love. It is thought that this painting may have been commissioned by the Medici family since it was owned by the Medici’s since the mid-15th century and there are orange trees in the background, the emblem of the Medici dynasty. 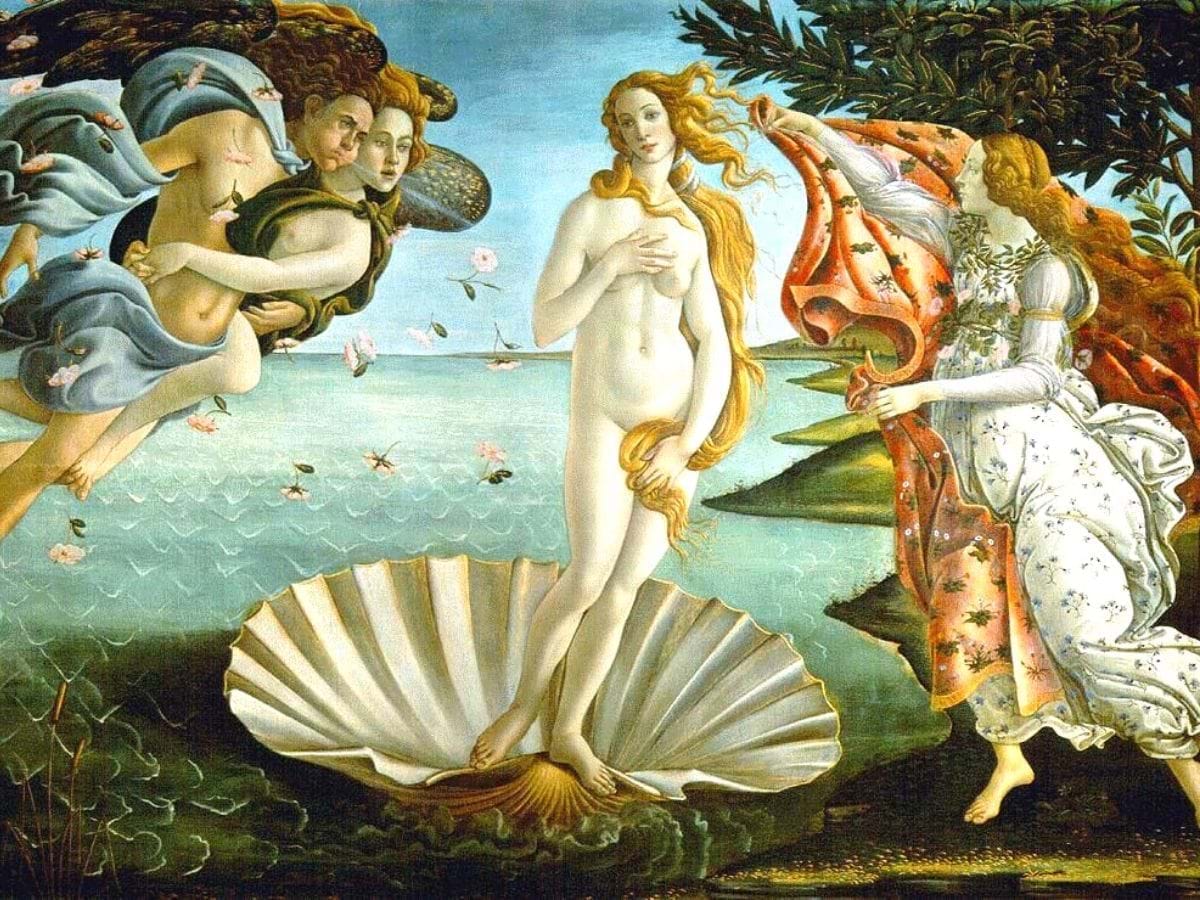 The Ognissanti Madonna by Giotto

Painted by Giotto di Bondone, this 13th century painter is said to have led the way for the painters of the renaissance. Straying from the harsh Byzantine style of the time and introducing the technique of real-life drawing to include a more natural human form. This painting was thought to have been originally designed as the main altar of a church and funded by an obscure religious order known as the Humiliati. The child is holding a rolled scroll in his left hand to symbolize knowledge and is giving a blessing with his right. Angels look intently with admiration and respect. Giotto was one of the most highly renowned painters of the time, having had previously painted works like the Scrovegni Chapel in Padova. 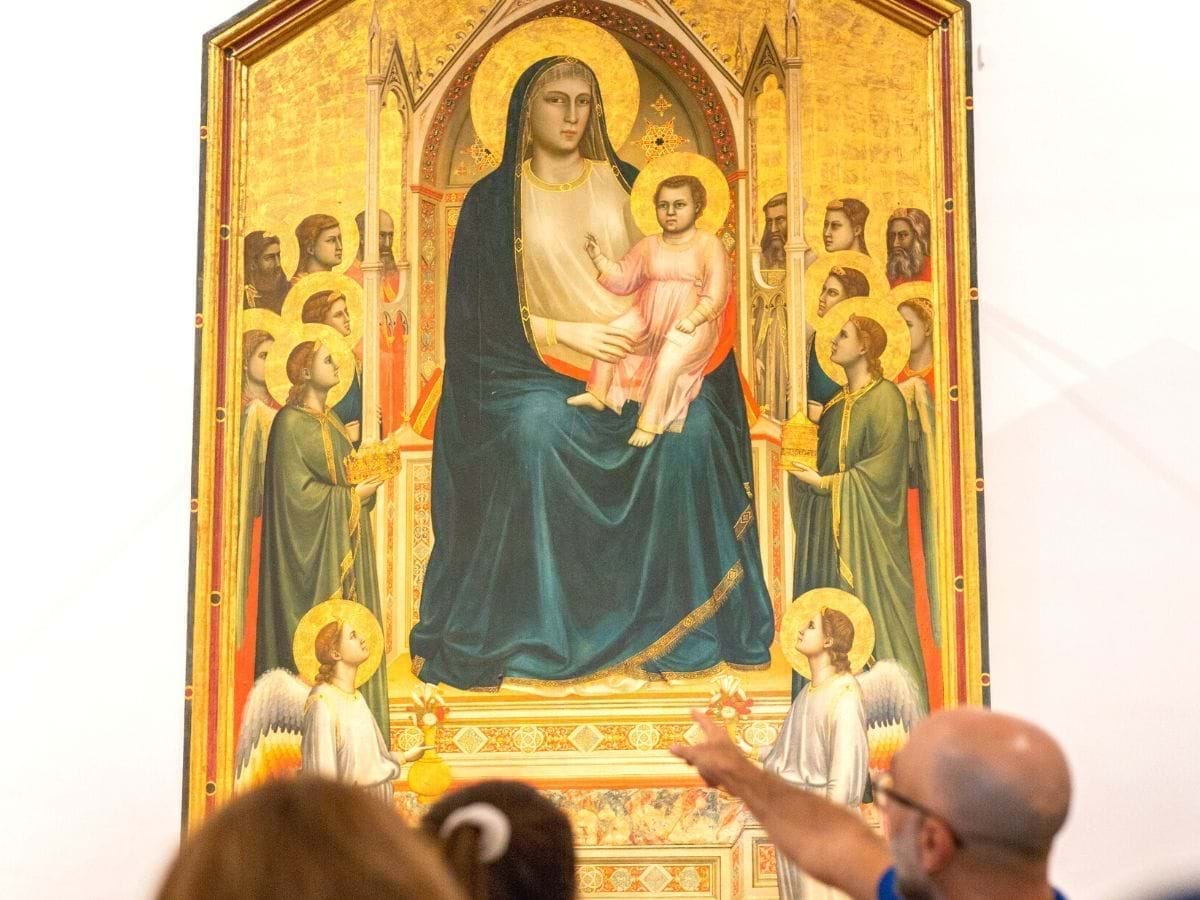 Dating back to 1472, this Renaissance painting is said to have been started by Andrea del Verrocchio, but finished by his pupil, Leonardo da Vinci. The painting depicts a scene whereby the virgin Mary is reading at an intricately decorated desk as she receives a surprise visit from the archangel Gabriel. Gabriel is there to let her know that she will become mother to the son of God. The angel is holding a Madonna lily in his hand as he greets Mary, this is representative of both Mary’s purity, and the city of Florence. The walled garden in which Mary is sitting is a symbol of her virginity. The marble desk at which Mary is sitting is representative of the tomb of Piero and Giovanni de Medici which was carved by Verrocchio. As Leonardo was still mastering the tricks of perspective at the time, there are some minor mistakes that can be seen. If you look at the right hand of Mary, it rests on the left side of the reading desk. In other words, her hand is closer to the viewer in comparison to the rest of her body and looks out of place. Additionally, the painting is lacking emotion in the faces of the characters, whereby the exact opposite can be seen in the Mona Lisa. 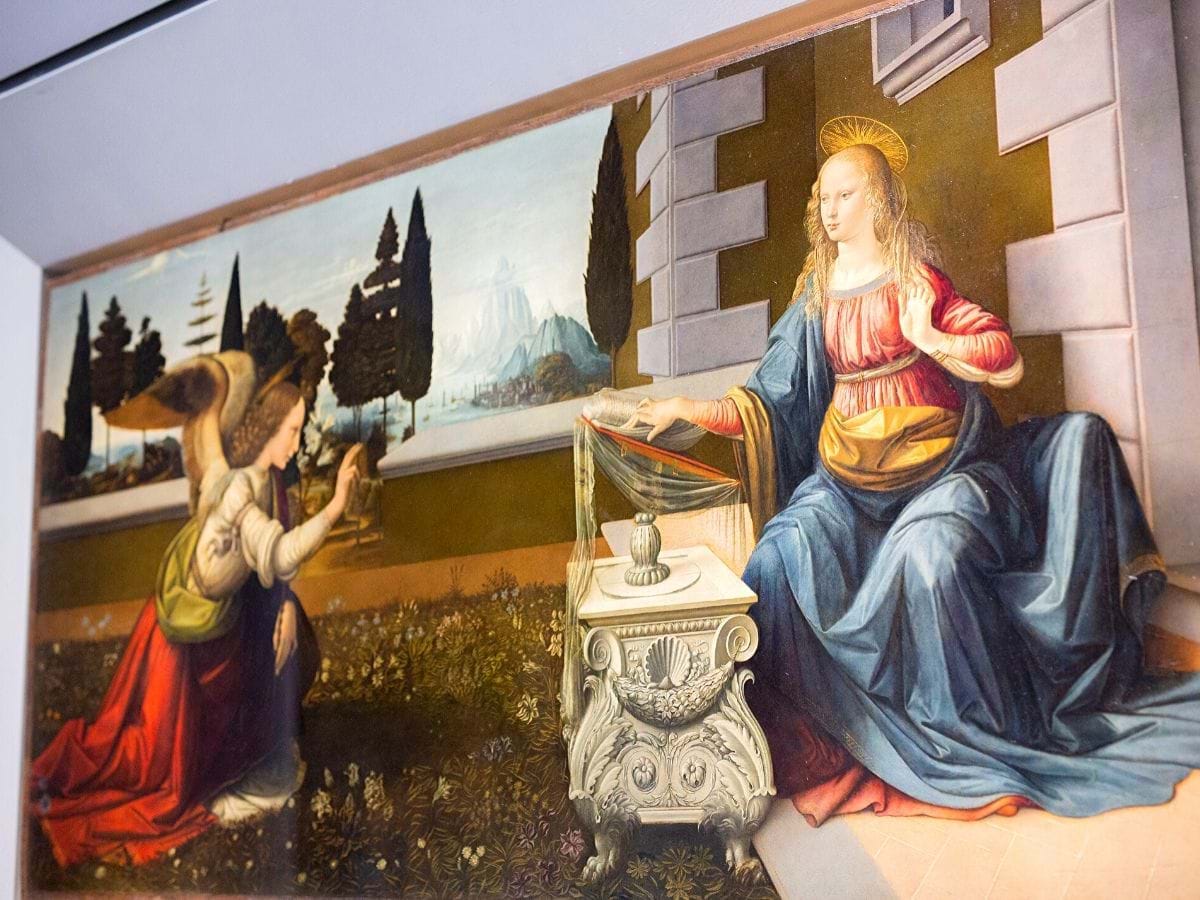 Originally commissioned as a gift for Lorenzo Medici’s bride, a cousin of Florence’s ruling family. This celebration of Spring is one of the most important early renaissance works, elaborately decorated and intricately detailed. Venus can be seen standing below her son Cupid, as he aims his bow and arrow at the three graces, sisters who are representative of; pleasure, chastity and beauty. In the left of the image, the Roman God Mercury, known as the messenger of the gods, pushes away a cluster of small grey clouds. To the right of the image is Zephyr, the Greek God of the west wind. Zephyr is seen to be grabbing Chloris, a nymph who is fanatical about flowers. Chloris transforms into Flora, the goddess of Spring, who is pictured left of the pair. 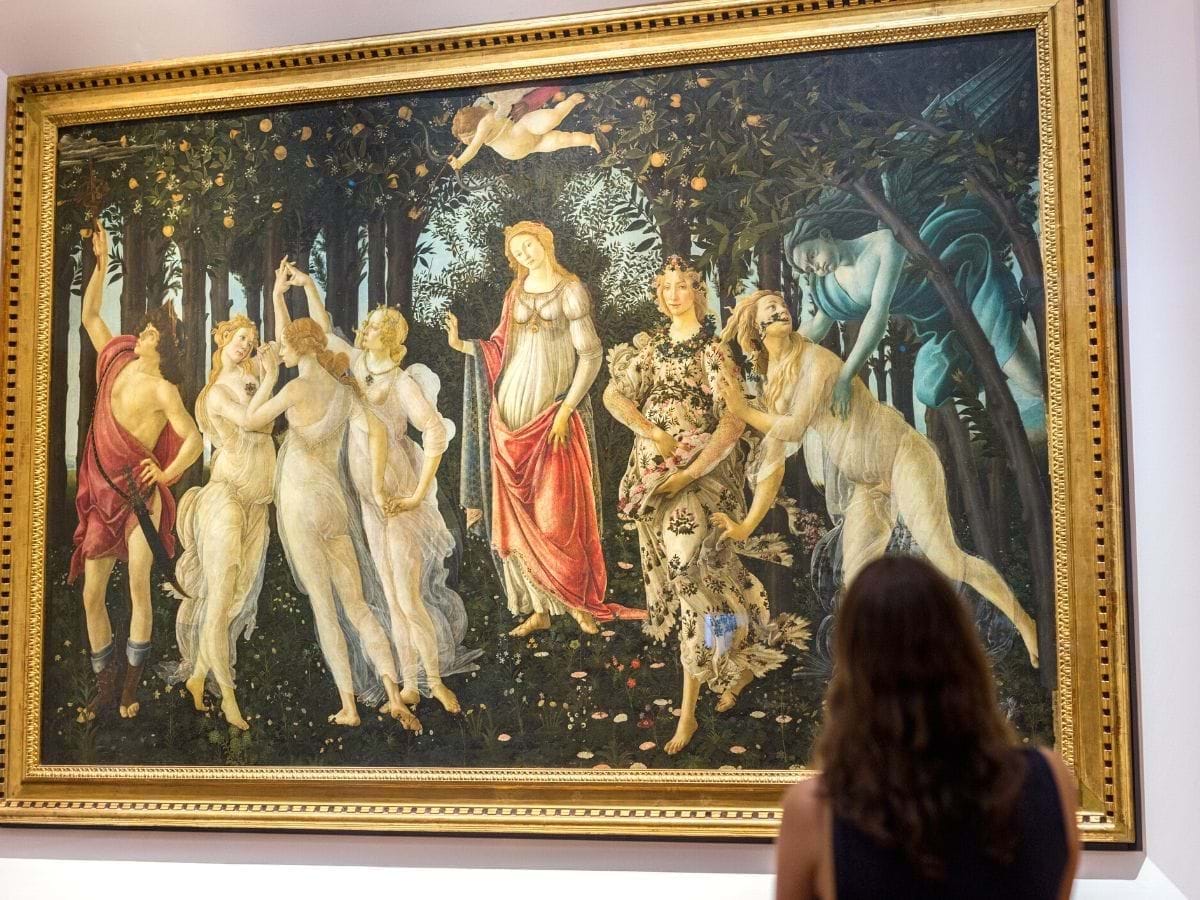 Madonna and Child by Filippo Lippi

This is possibly the most realistic and lifelike of all Madonna and Child Renaissance paintings, the angels seem especially playful and the one in the foreground looks as though he might burst into laughter at any minute. The delicate swirls of fabric around her face are something Lippi brings to early Renaissance paintings that would be carried on by his student Botticelli. Lippi was a particularly interesting character of the time. He was a monk with an animistic lust for Women. Lippi was known to be so lustful that he would give anything to enjoy the women he wanted if he thought he could have her. However, if he couldn’t buy what he wanted, he would cool off and let go of his passion over her by painting a portrait of her. Because Lippi’s lust was so violent, sometimes it rendered him unable to work. At one point, Lippi was commissioned to finish a piece for Cosimo de Medici. Cosimo had Lippi locked in so he wouldn’t wander off, but after a few days, his animal instinct drove him to seize a pair of scissors, make a rope from his bed-sheets and escape through a window. 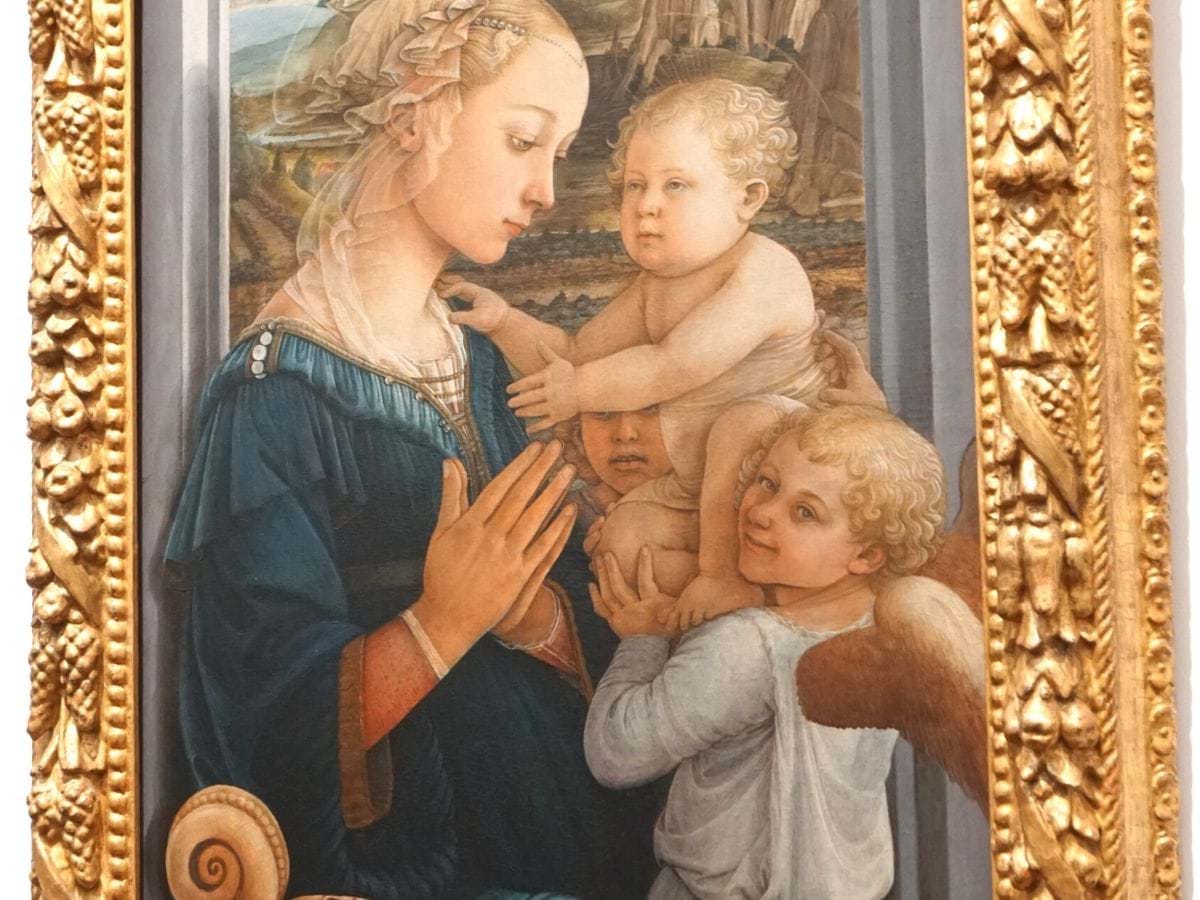 Painted by the iconic renaissance painter Michelangelo Buonarroti, the image is surrounded by a beautifully engraved wood-gilt frame and painted on wood itself. Despite Michelangelo’s limited experience with Tempera/Wood painting, he manages to create a masterpiece of composition, beauty and invention. The painting itself depicts the passing of Jesus between Mary and her father Joseph. It’s unclear whether the infant is being passed to or from Mary. However, the intense loving gaze from Mary to her son as well as the concentration of care on Josephs face come together to create the most tender interaction between figures ever witnessed in a Michelangelo creation. 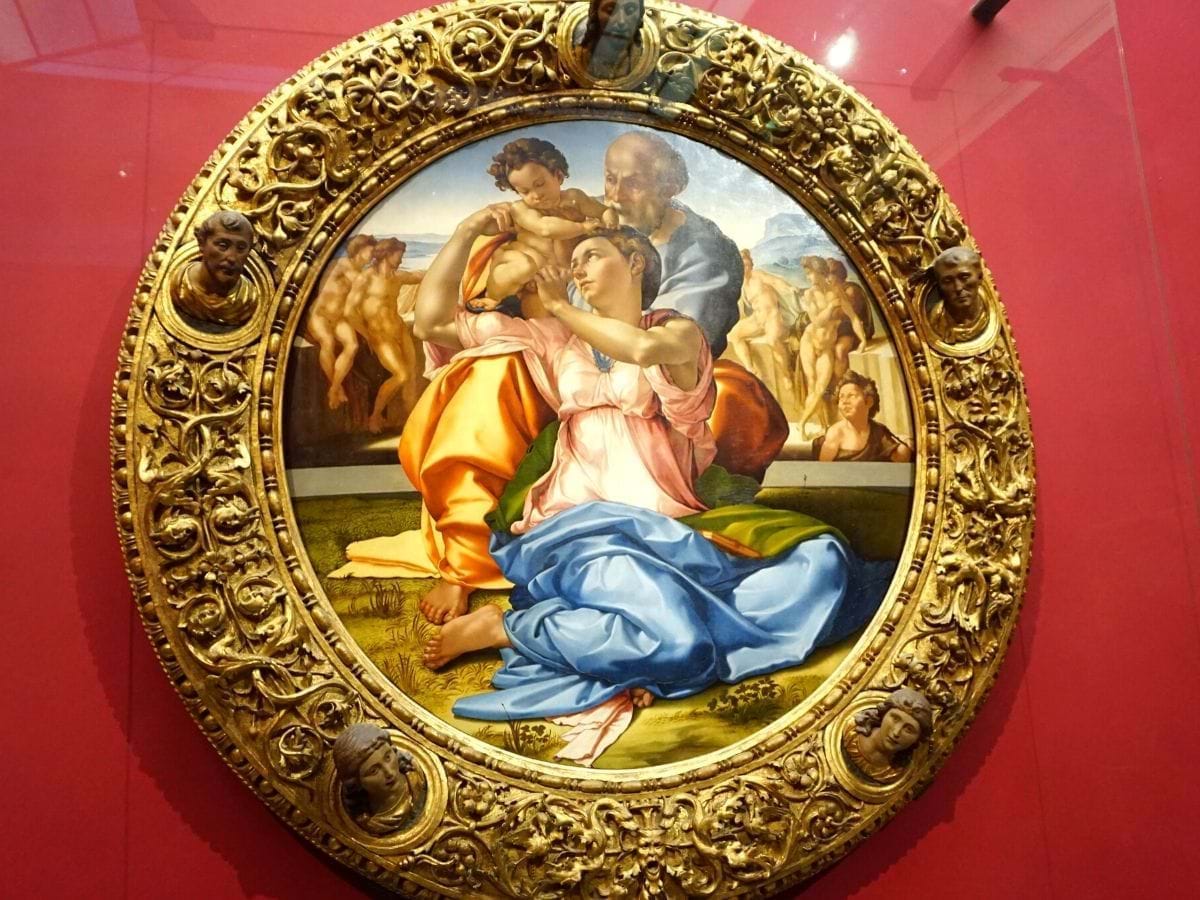 Duke and Duchess of Urbino by Piero della Francesca

One of the most famous works of the Italian Renaissance, this painting depicts duke Federico da Montefeltro and his wife Battista Sforza. This duke is said to have been a skillful strategist and fearless leader of the Mercenaries, turning Urbino into a refined and renowned cultural center. This double portrait style is reminiscent of classical portrait medals and gives the two a formal, regal appearance. Their busts emphasize their prowess, jutting out over the landscape in the background, emphasizing the majesty of the court of Urbino. The profile chosen for the image was an obvious choice. The duke had previously lost his right eye and broken his nose during various tournaments. The duchess is lavishly dressed and painted to emphasize her pale white skin and high forehead, both symbols of aristocracy and luxury at the time. This image is seen to be representative of the perfect Renaissance man, aware of his importance in the world, his culture and intelligence. 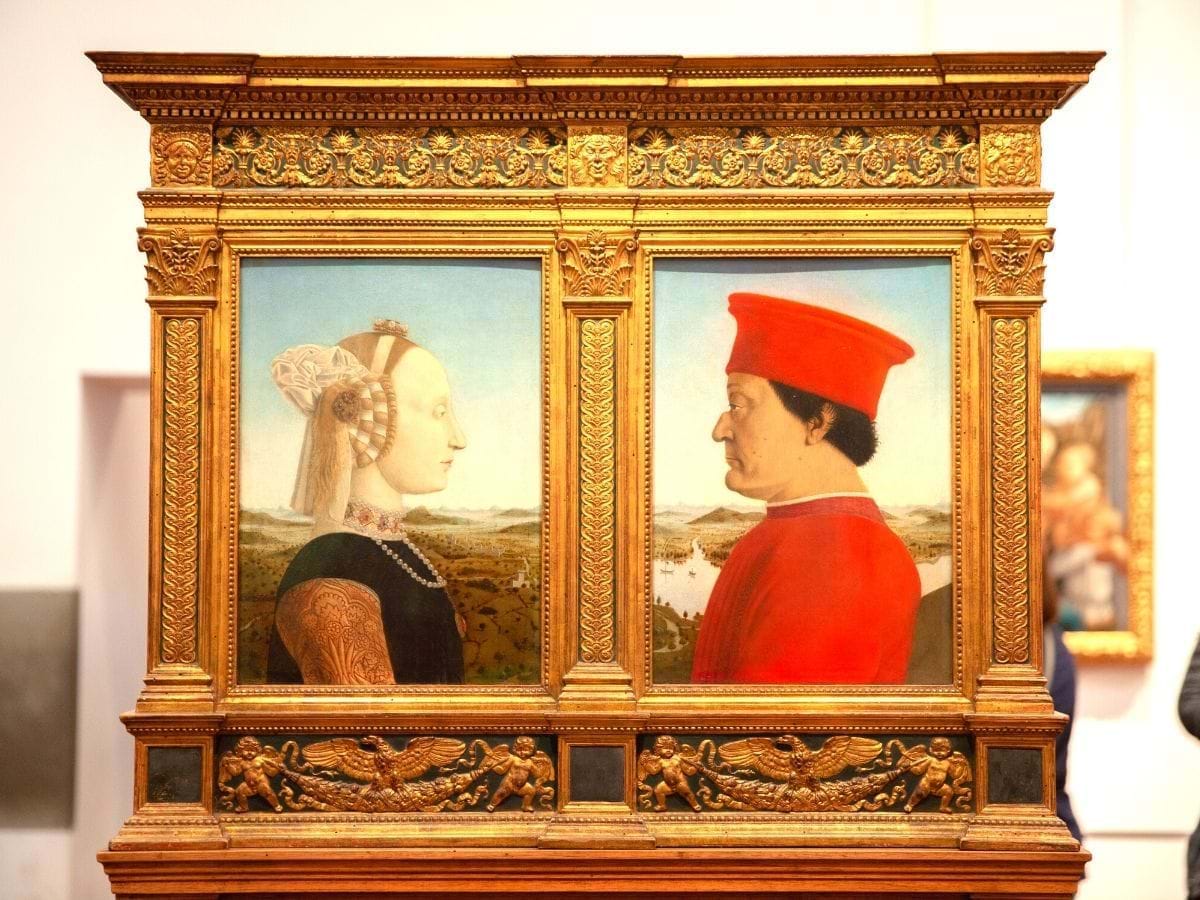 Why You Should Visit the Vatican 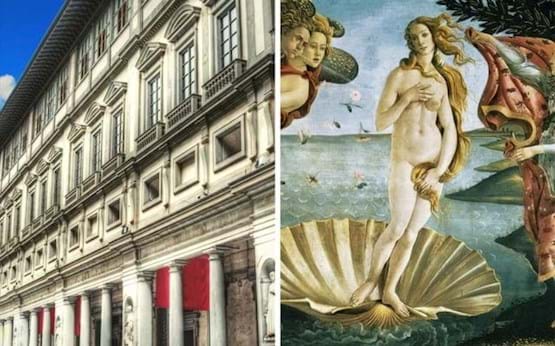 See the beautiful masterpieces that defined what became known as the Renaissance at the Uffizi Gallery as your expert guide brings them to life with personal stories about the artists and rich historic background. On this artistic journey you will see works by Botticelli, Leonardo da Vinci and Michelangelo, to name but a few.