With so much to see and do in this mesmerizing city, why spend any time waiting in line? Luckily, you won’t have to! When you book with us we guarantee skip-the-line access into Venice’s most popular tourist destinations so you won’t miss out or waste any precious time!

Discover the Stories Behind the Walls of Doge’s Palace:

From witnessing to the rise and fall of the Venetian republic, many extensions, reconstructions and numerous transformations later, the Doge’s Palace has had quite the exciting life. Once residence to the Duke of Venice, this Gothic style landmark has grown with the republic and continually expanded in order to hold the ever-increasing number of Great Council Members. After the fall of the venetian republic in 1797, this momentous government building was transformed into a prison. Famous for the bridge of sighs, prisoners cells were connected to the interrogation rooms by a bridge. It is an old tale of Venice that you could hear the convicted felons sigh as they were being escorted to their jail cells, hence the name. Today, the palace is home to 11 of the most famous museums in Venice. Included in your tour, you will 1.5 hours visiting all of the palace’s most noteworthy features. Your guide will enlighten you with a world of knowledge as you pass through the many museums and rooms containing artwork by some of the greats; Tintoretto, Titan and Carpaccio.

Commonly referred to as one of the best examples of Italo-Byzantine architecture in the country, this structure is anything but simplistic. There is a wonderous mix match or Oriental and Greek influence, as well as a jumble of Renaissance and Gothic styling, something not commonly found anywhere. Located directly across Piazza San Marco from Doge’s Palace, this building was originally used as the Chapel of the Doge but has since been converted to the city’s cathedral in 1807. Having taken centuries to complete, the building is home to some of the most spectacular mosaic work in the world, covering a vast amount of both the interior and exterior. After getting a thorough introduction by your guide, you will then be free to explore the basilica at your own pace. Make sure to bring cash with you if you wish to purchase tickets to access the basilicas grand terraces, these can be bought on site and offer a birds eye view of the city.

Get Acquainted with Venice in the Most Natural way, by Gondola

After being brought from St. Mark’s Square to your designated Gondola Station, you will then be brought on a 30-minute journey of the city’s canals. Beginning at the grand canal, you will first pass some of the most iconic sights Venice has to offer, including the Santa Maria della Salute Church. This Baroque style Roman Catholic church was built in 1631 as a special tribute for surviving the plague of the previous year. After taking in the main parts of the city, you will then be brought to the more quiet, quaint canals where you will see the second home of Wolfgang Amadeus Mozart, the Venice Opera House. Shortly thereafter you will be brought to the Church of San Moisè and finally the Gothic-Byzantine Façade of the Bauer Palazzo.

With a small group of 24 people or less, headphones to make sure you don’t miss a beat and fast access into Venice’s most popular tourist destinations, this is one tour not to be missed! 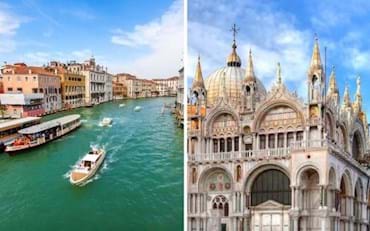 Venice and Small Islands in One Day 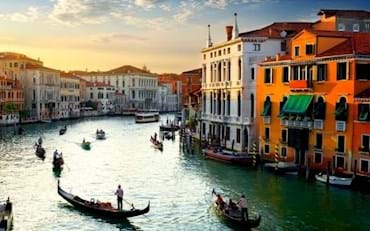