While we can’t quite facilitate time travel, visiting Pompeii is just about as close as you can get. Offering tours from Rome to Pompeii, we can help you walk in the footsteps of the people who lived there before the volcano erupted and froze the city in time. 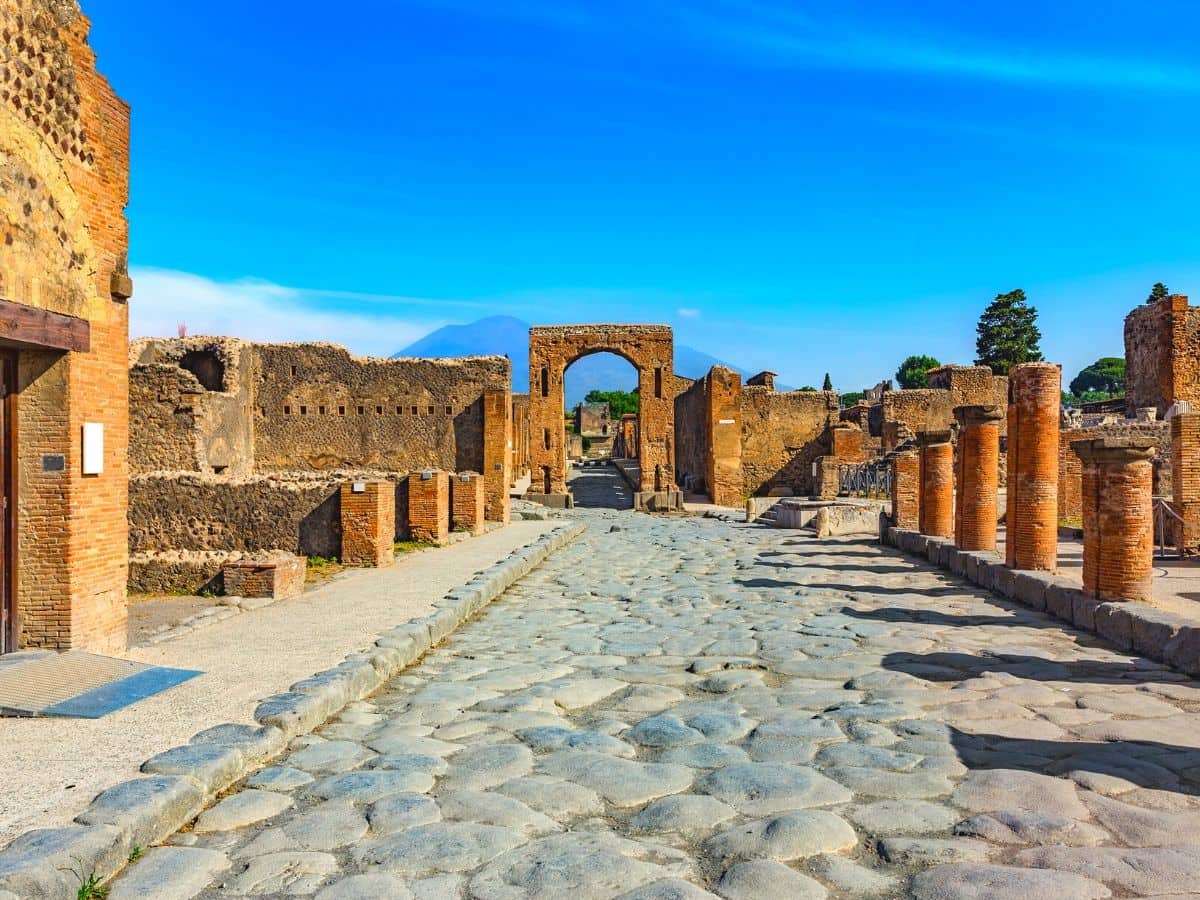 Pompeii was under Roman rule at the time of the eruption - day to day life there was similar to other Roman cities, and Pompeii was a busy town filled with its local citizens as well as Rome’s upper class, who visited on a regular basis as a holiday from their own lives and responsibilities.

With a 20,000-seat arena, brothels, shop and factories, Pompeii had a lot to offer. Elaborate houses and villas were dotted around the town, and while many had no running water this didn’t matter, public fountains and bathing houses became somewhere to socialize as well as providing clean drinking water or somewhere to wash. There was a marketplace, taverns, cafés and plenty of space to sit and relax after a hard day of work.

Life was relatively simple in Pompeii. Tours to Pompeii from Rome will show you what’s left in the fascinating city frozen in time. Our expert guides will tell you about the people who lived there. They woke with the sun and worked in the shops and the fields throughout the morning after a breakfast of bread and cheese - at midday it was time to relax, heading to a gladiator exhibition at the arena or just sitting down in the sun. They ate bread, fish, cake and fruit for lunch before heading to the public baths of an afternoon.

As mentioned, these baths were not only for bathing, they were a place to socialize and have fun, as well as a meeting place to discuss business and politics. They were inexpensive, and anyone could use them: the rich and the poor sat alongside each other in the baths. As the evening fell, the people of Pompeii would eat a dinner of eggs and olives, as well as some meat, fish or cake if they could get their hands on it. Bed time was generally just after sunset, though residents were known to socialize at night time too.

What can you see at Pompeii now? 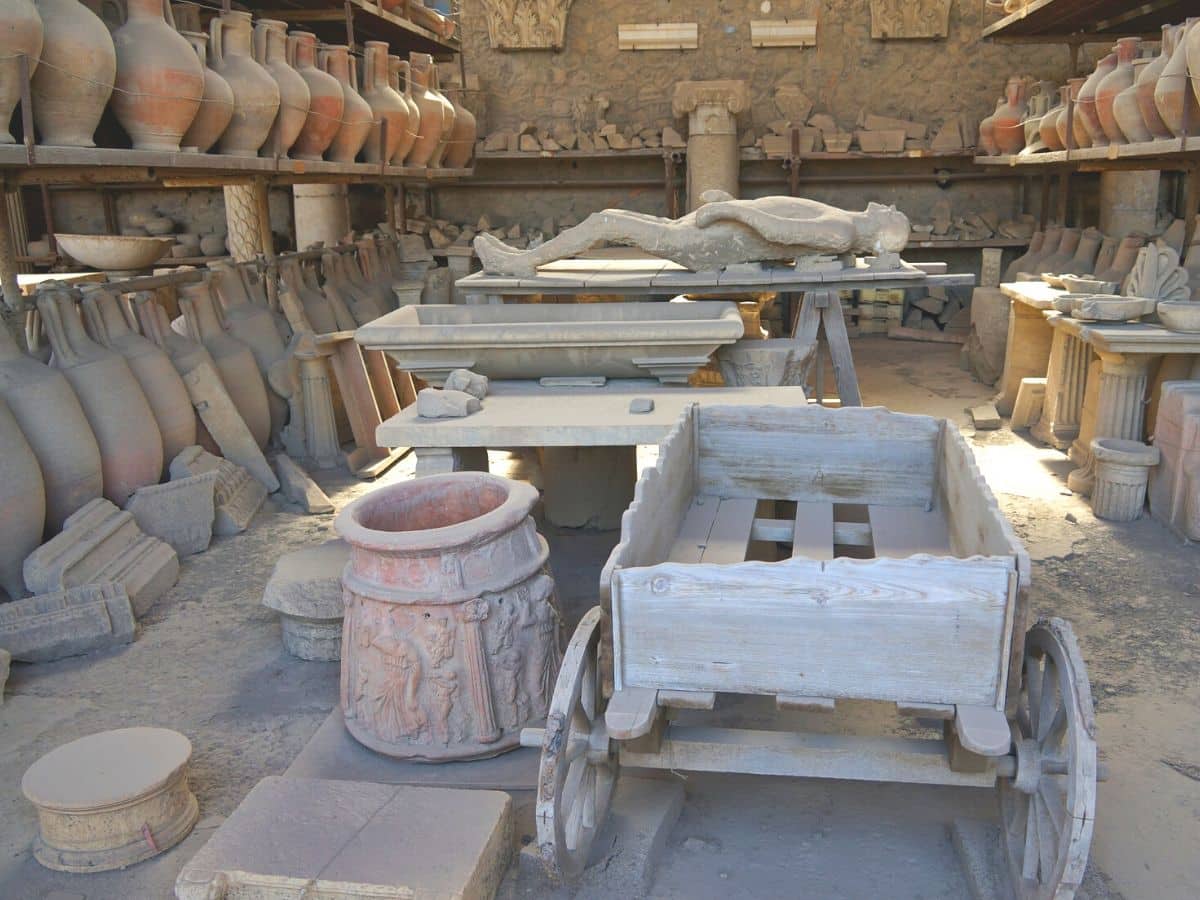 The eruption truly did freeze this maritime city in time. Much of it is perfectly preserved, having been buried under layers of ash, pumice and other materials. The surviving residents of Pompeii fled to nearby villages, towns and cities taking with them whatever they could carry; jewelry, lamps, coins and clothing. They won’t have traveled far, but what happened was truly devastating to the people who called this city home.

When Pompeii was rediscovered in the 16th century, archaeologists marveled at what they found. It remains to this day one of the most well-preserved examples of ancient Roman architecture and culture. There is so much you can see on a Pompeii tour from Rome - step back in time with us and explore the following… 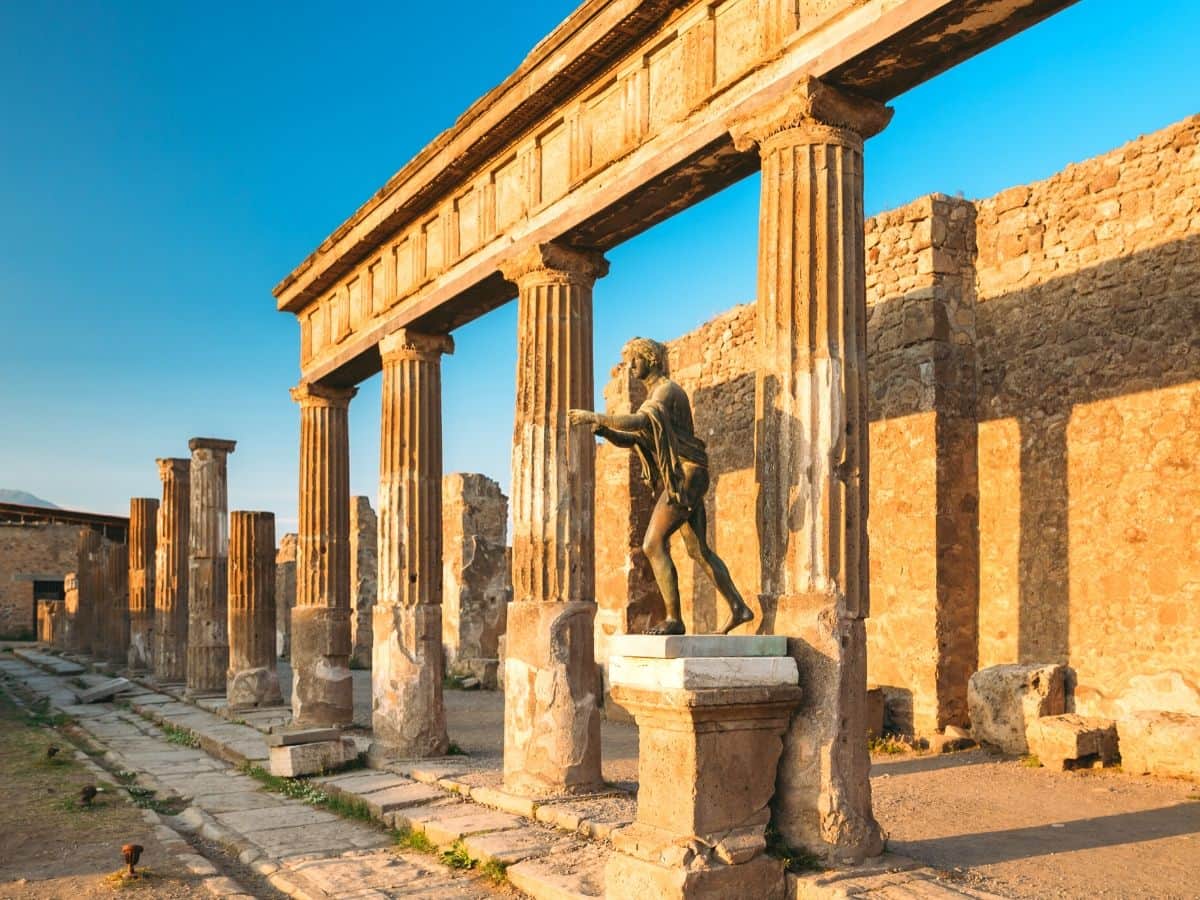 Built in 120 BC, the temple was dedicated to the Greek and Roman god of Apollo. Located in the Forum and facing the northern side of Pompeii, this temple was the town’s most important religious building. With mosaics, basins, statues and columns, the Temple of Apollo is an iconic site in Pompeii. In their day to day life, the people of Pompeii would worship here and there is a small room where the temple caretakers are thought to have lived. 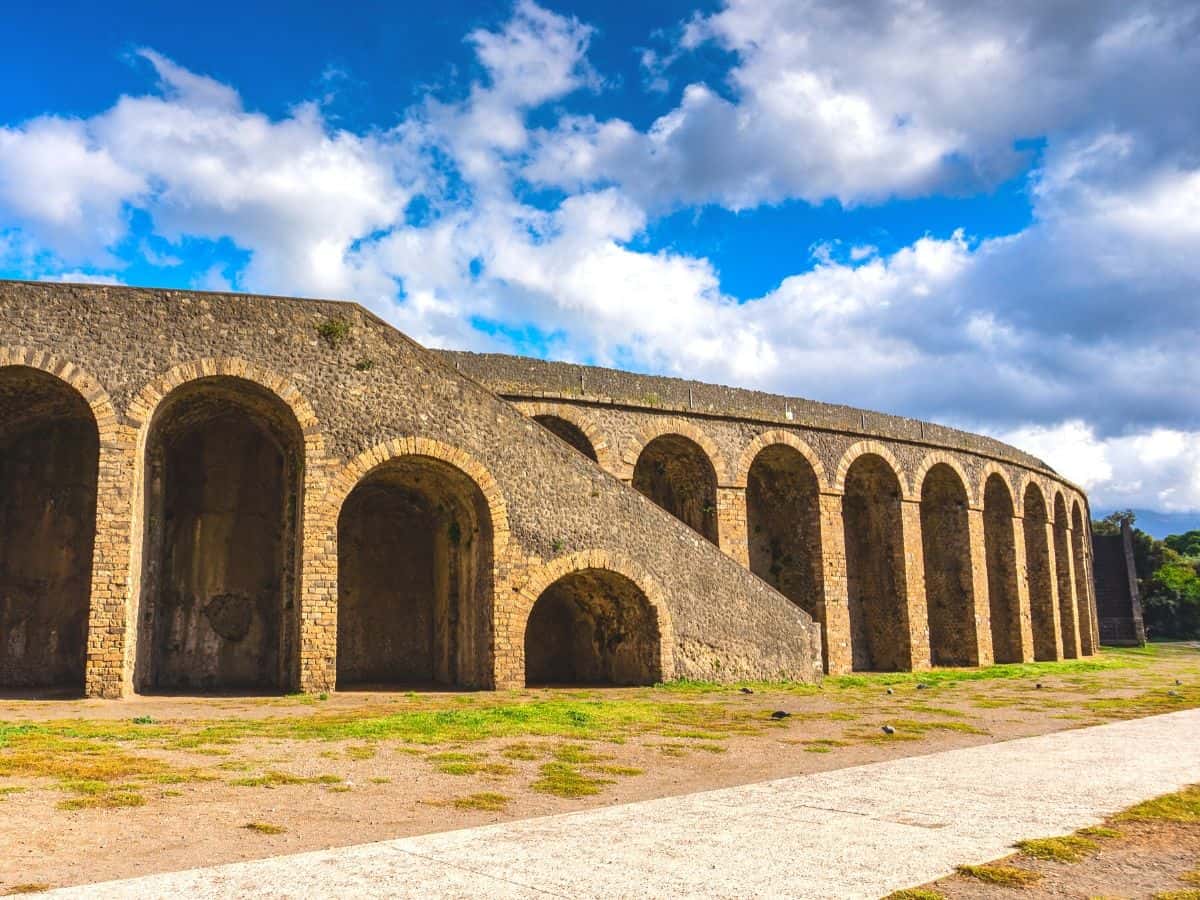 Amphitheaters are synonymous with Roman history, and there are fantastic examples all around Italy and other areas of Europe such as Spain and England. The Amphitheater of Pompeii is the oldest surviving amphitheater, and Pompeii’s citizens would go there to enjoy gladiator combats as well as watching executions and animal slayings. This particular amphitheater seated at least 20,000 people!

House of the Faun 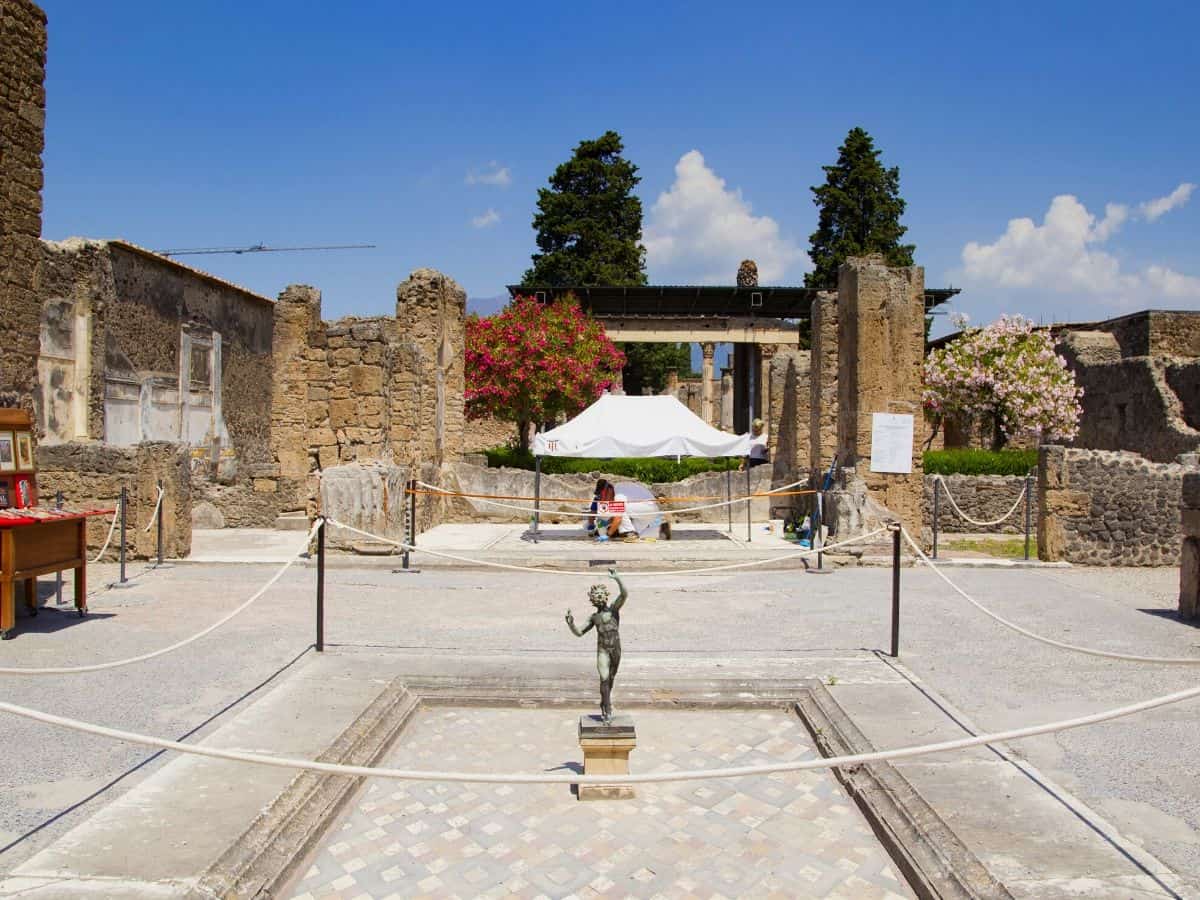 While Pompeii is completely full of Roman ruins, the House of the Faun is the largest house in the city. It was built during the 2nd century and is one of the best reflections of Roman republic luxury. The house was a private residence, and it is likely that a rich citizen of Pompeii lived here. There was a lot of decor, particularly mosaics as well as a statue called The Dancing Faun, found during excavation. 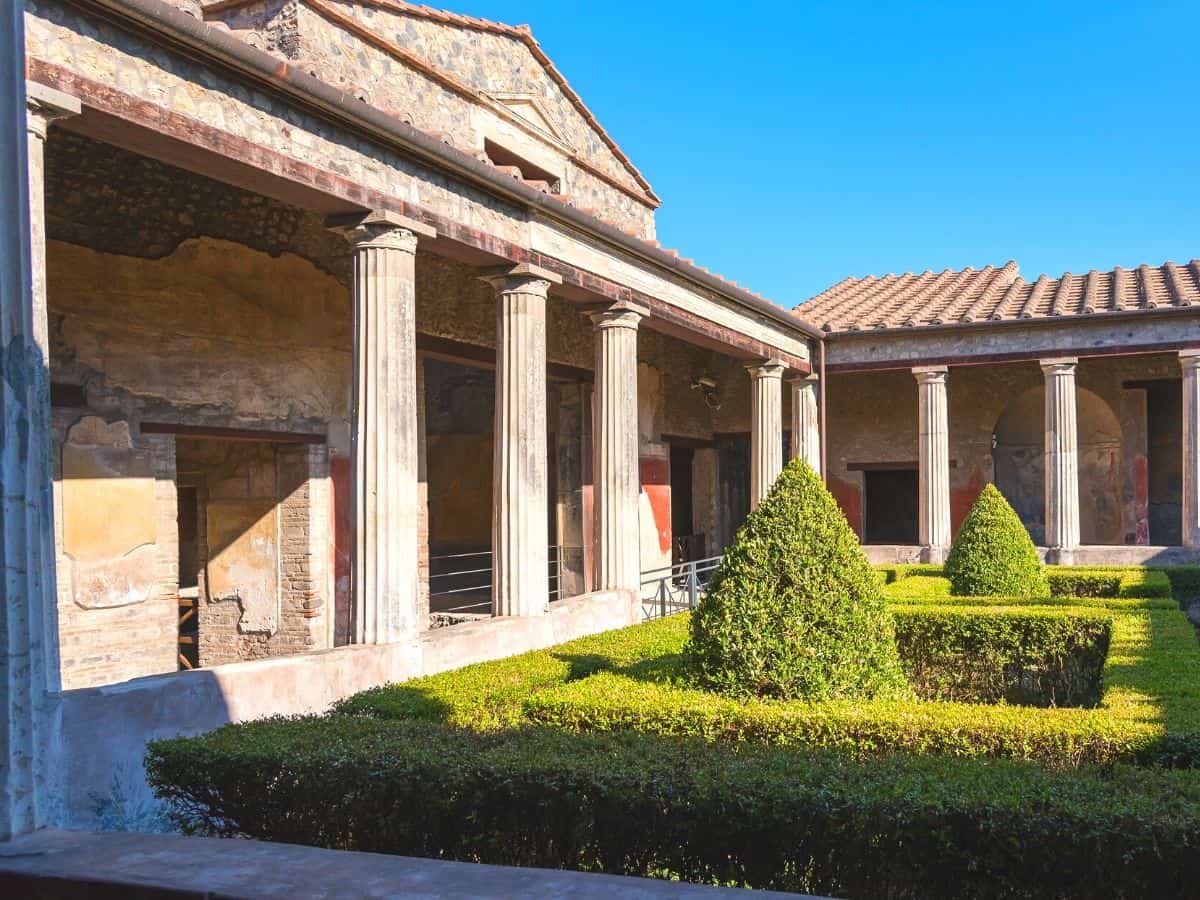 There are plenty of other houses that you can see when you tour Pompeii from Rome. It is fascinating gaining insight into where Roman people lived in this town, and how they spent their days. There is the House of the Surgeon, the House of Loreius Tiburtinus, the House of Vetti and the House of the Tragic Poet. They are all different sizes, some with gardens, artworks and mosaics too. Wandering around the ruins of these houses is truly like stepping back in time and walking the footsteps of the people who lived in Pompeii before the eruption of Mount Vesuvius. 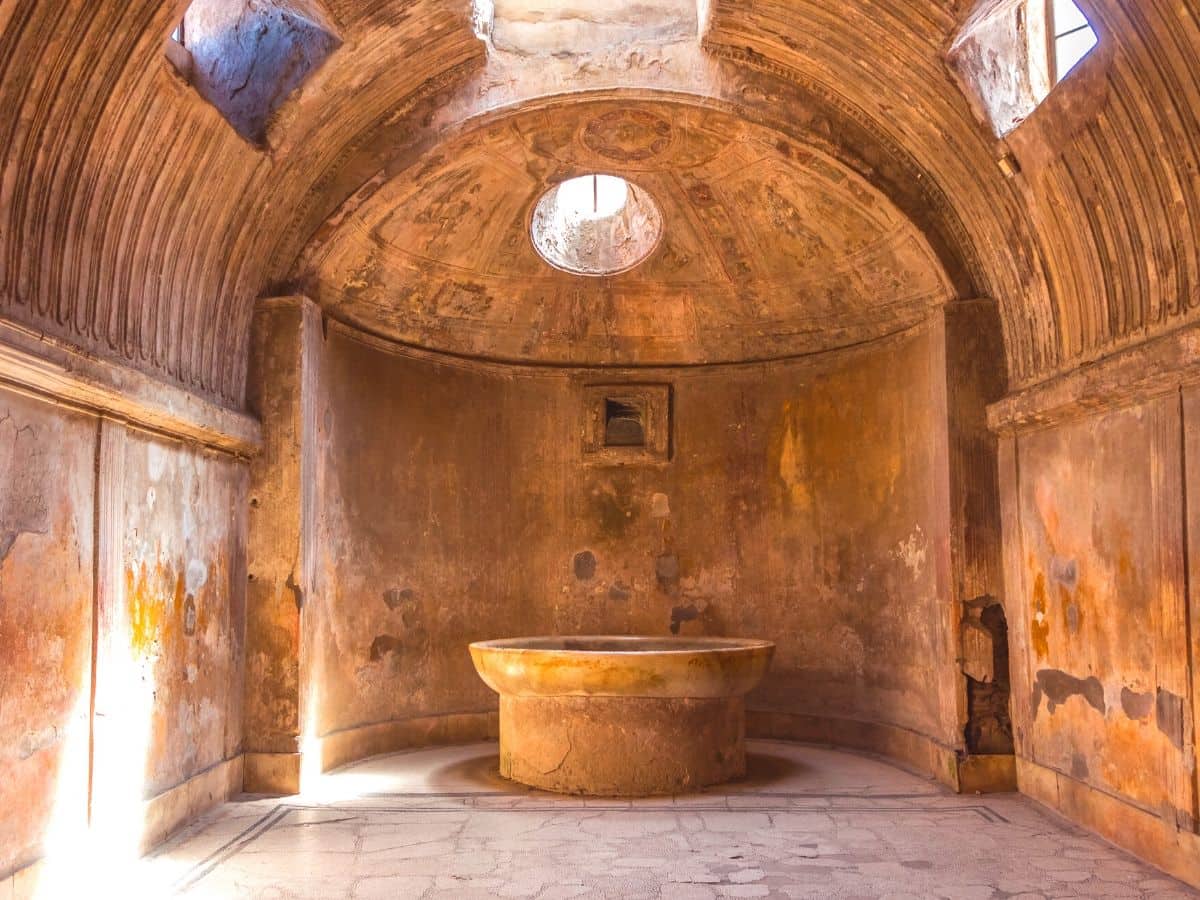 As mentioned, the public bath houses were a place to bathe and socialize. They were divided into two sections - one for men, and one for women. Each section had four different rooms: a changing room, a cold bath room, a tepid bath room and finally a hot bath room. There were latrines (toilets) and gymnasiums too, and the baths were an incredibly important part of day to day life in Pompeii.

There is so much to see in Pompeii - it is such a well-preserved example of a Roman town, with so many archaeological ruins to explore. If you want a chance to turn the clocks back and see what life was really like during the rule of the Roman empire, then look no further than Pompeii. With our day trips and tours to Pompeii from Rome you can see it all as well as skipping the lines, so there’s no waiting around and losing valuable exploration time! 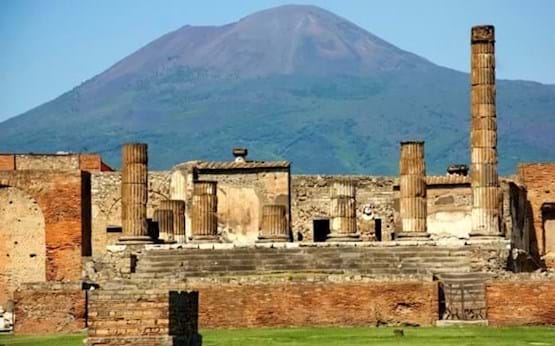 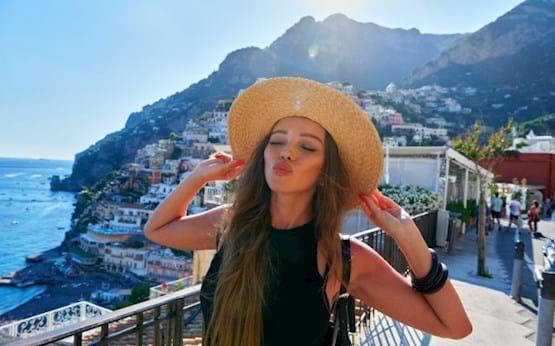 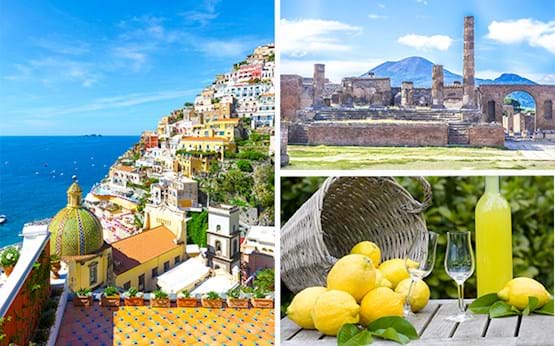