Comprised of four rooms within the Vatican, the paintings on the walls here are known as some of the most impressive renaissance artwork to date. According to the Vasari, these rooms were elaborately decorated by the famous painters; Piero della Francesca and Andrea del Castagno during the early 15th century. Although these rooms were alreay decorated, after his coronation, Pope Julius II decided he had something different in mind and began the search for replacement painters. It was at this same time that Julius hired Michelangelo to paint the Sistine Chapel.

Initially, a group of well-known artists were commissioned to repaint the rooms. However, Julius turned down this work as he was looking for someone more modern, not the old fashioned, Bramante style work these artists were known for. It was down to the papal architect to select a more contemporary artist and he suggested Raphael. After viewing the first sketches of Raphael’s work, the pope commissioned him to paint over all of his predecessors. The rooms took over a decade to complete and were finished four years after Rafael’s death in 1524. This project occupied much of Rafael’s working life of which he was relatively unknown beforehand. However, Rafael is now grouped alongside renaissance greats such as Michelangelo and Leonardo da Vinci.

The Raphael Rooms are located directly above the apartment of Alexander Borgia, on the third floor of the Vatican, overlooking the Belvedere Courtyard. The two rooms that Rafael painted in full are; Sala della Segnatura (Room of Signatures) and Stanza d’Elidoro (Room of Heliodorus). The order in which you move through the rooms is as so; Sala di Costantino (Room of Constantine), Stanza di Eliodoro (Room of Heliodorus), Stanza della Segnatura (Room of the Segnatura) and Stanza dell'incendio di Borgo (Room of the Fire in the Borgo). 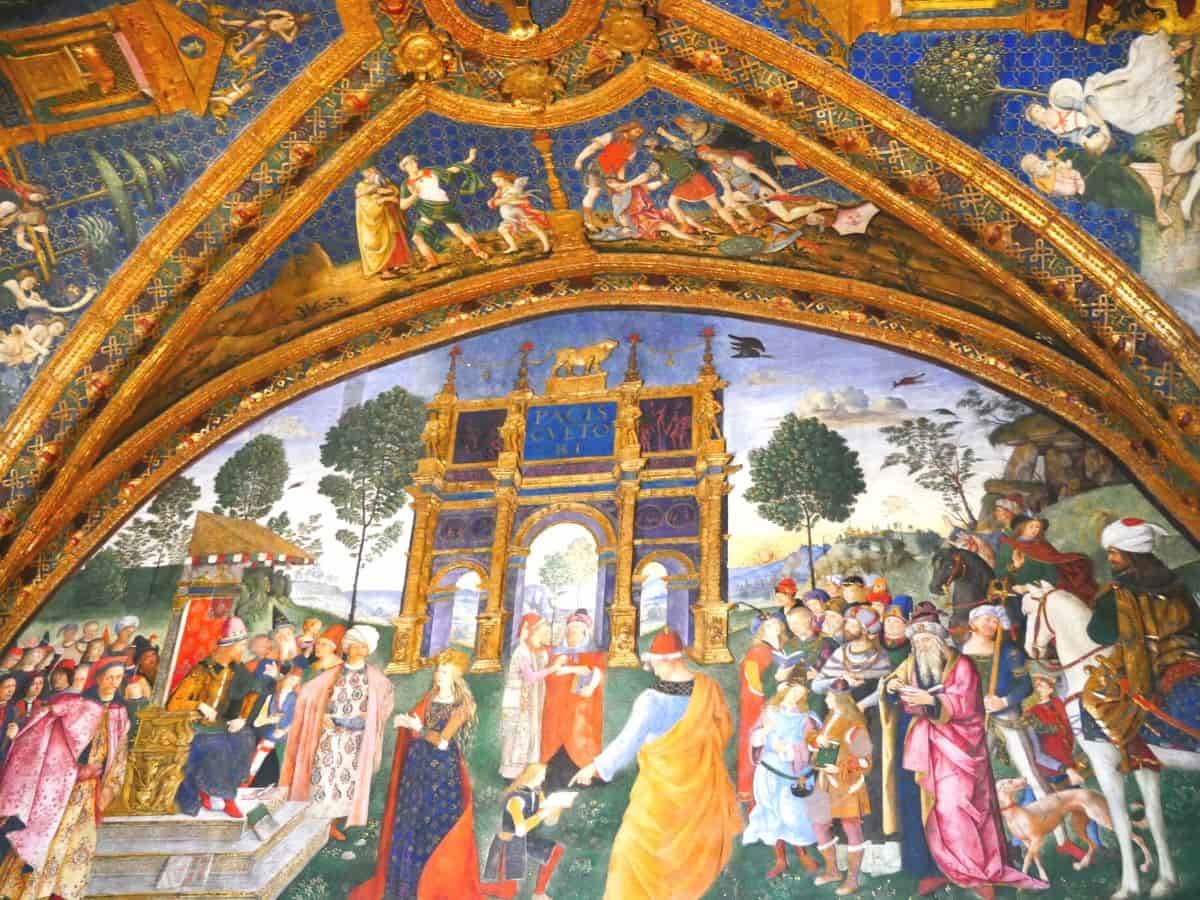 The first room “Room of Constantine” was painted by Rafael’s students after he and Pope Julius had died. This room was named after the iconic Roman emperor as the first emperor to officially recognize Christianity as a legitimate faith. The walls and frescoes in this room depict four major events throughout Constantine’s life, including; the Vision of the Cross, the Baptism of Constantine, the Donation of Rome and the Battle of Constantine against Maxentius. The ceiling of the room is painted in the theme of Christianity triumphing over pagan practices. The vision of the cross depicts the story of a cross appearing to Constantine as he confronted his rival Maxentius. The battle of Constantine shows the battle that took place after the vision. The baptism of Constantine displays the emperor being baptized by Pope Sylvester I in the Lateran Baptistery at Rome. The donation of Constantine is inspired by a forged imperial decree which granted Rome and the western part of the Roman empire to the Pope. 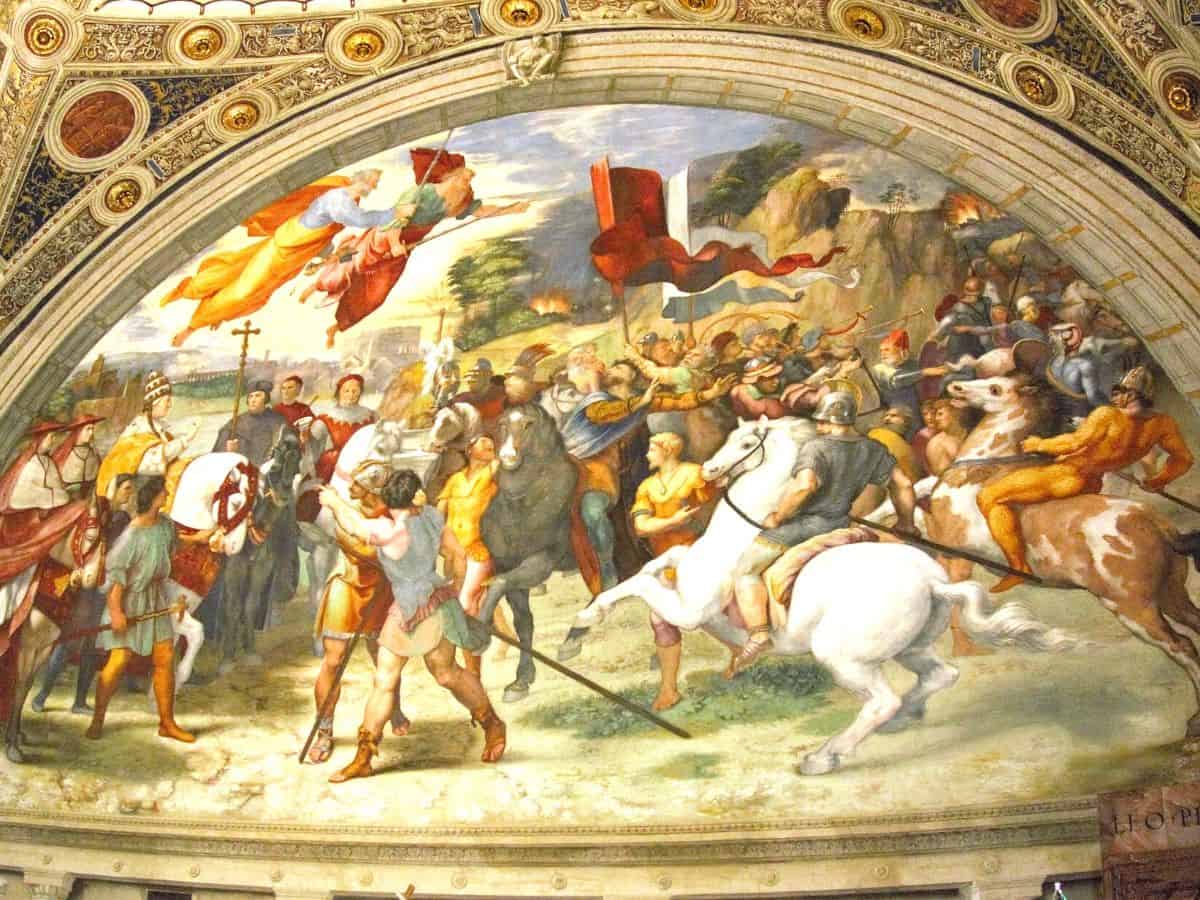 The room of Heliodorus is themed of the holy protection that was granted to the church by Christ. The four paintings included in this room are; The expulsion of Heliodorus from the temple, the mass at Bolsena, the meeting of pope Leo I with Attila and the deliverance of St. Peter from prison. In comparison to stanza della segnatura, Raphael kept most of the figures in the paintings the same size and more expressive. By using theatrical lighting effects, the actions and emotions of the figures have a greater impact on the viewer. In the expulsion of Heliodorus, this indo-greek ambassador was sent to a temple in Jerusalem to steal treasure. However, the priest of the temple prays for angels who came down and chased Heliodorus from the temple. The mass at Bolesna shows the story of a Bohemian priest who doubted the doctrine of transubstantiation and proceeded to see the bread/body of Christ begin to bleed during its consecration at a mass. The meeting of Leo the Great and Attila the Hun depicts the famous conference between the pope and the Hun conqueror, including images of St. peter and St. Paul in the background bearing swords. The deliverance of St. Peter shows in three episodes how Saint Peter was liberated from prison by an angel, symbolizing the power of the representative of Christ to break human restraints. This painting is a play on light, displaying natural moonlight, man made torchlight and angelic light outshining the rest. 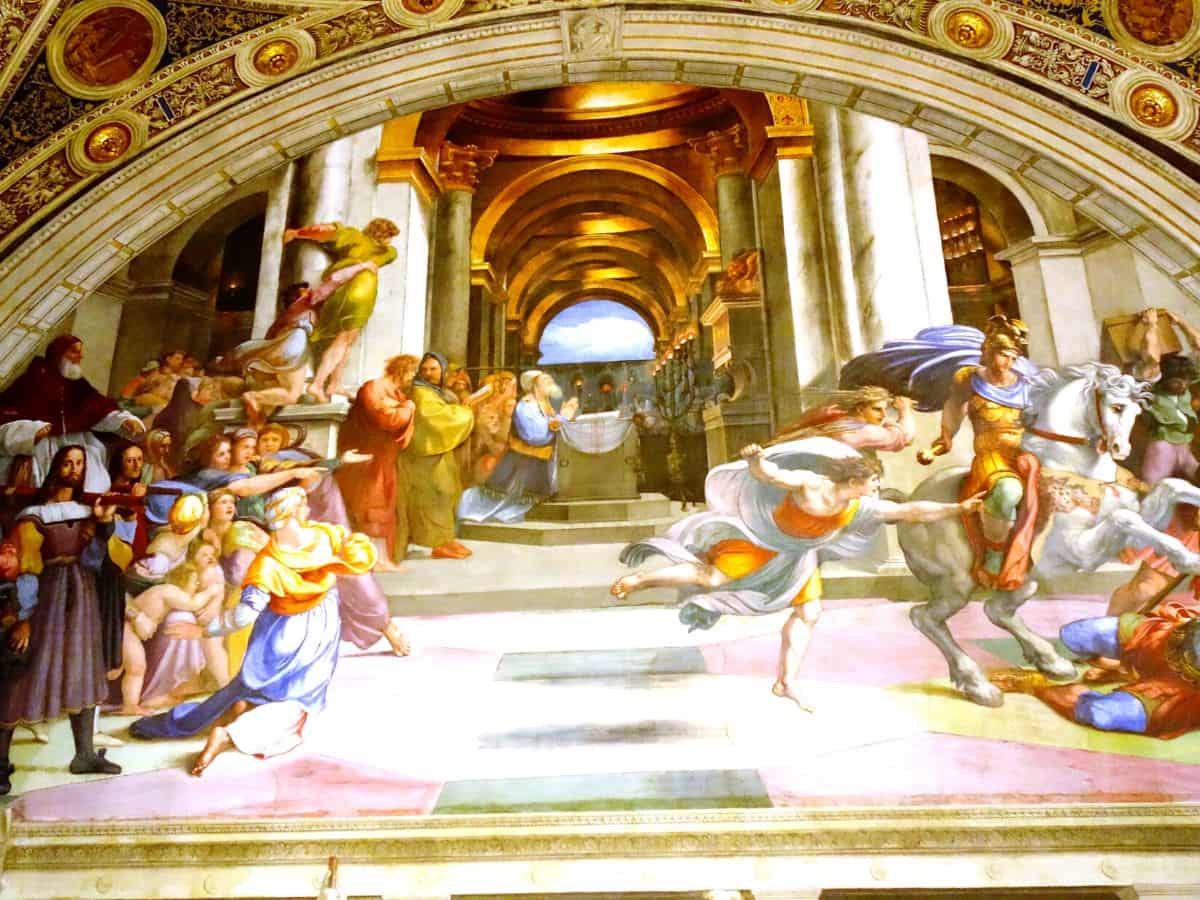 The room of signatures is named aptly as it was the council chamber where most of the important papal documents were signed and stamped. This was the first room decorated by Rafael with a theme of spiritual wisdom, honoring similarities between Christian teachings and Greek Philosophy. Paintings in this room are; the Disputation of the Holy Sacrament, The Parnassus, The School of Athens and the Cardinal Virtues. The disputation or adoration of the holy sacrament shows the connection between heaven and earth by this holy offering. The Parnassus is the dwelling place of the national divinity of the Greeks, Apollo. Apollo is surrounded by muses and poets from the time. The School of Athens represents varying degrees of knowledge and acquiring of the truth through reason. The philosophers walking in the direction of the holy sacrament in the fresco on the opposite wall suggest that the whole room is a movement from classical philosophy to religion and from Pre-Christianity to Christianity. The Cardinal Virtues present the virtues of Fortitude, Prudence, and Temperance alongside Charity, Faith and Hope, this was painted by Rafael’s workshop. 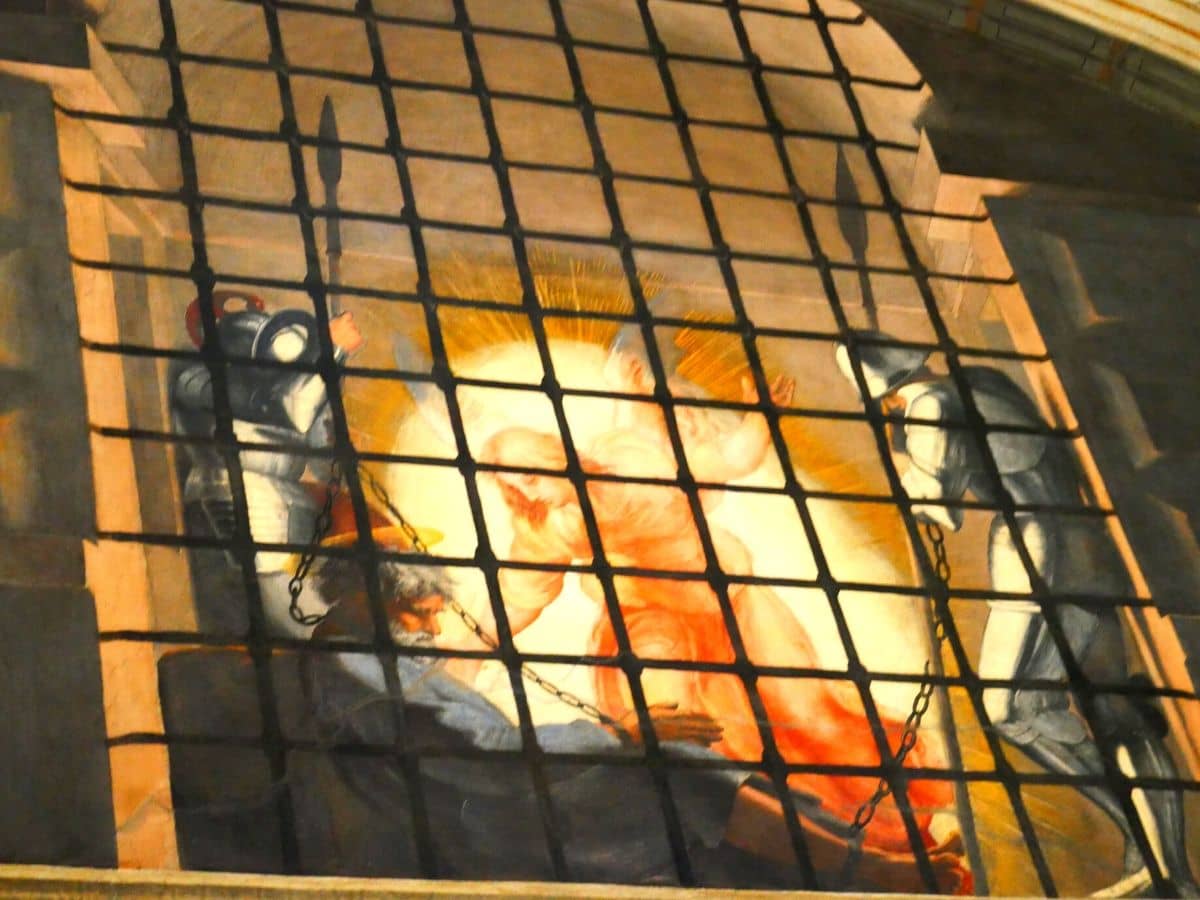 Stanza dell'incendio di Borgo (Room of the Fire in the Borgo)

The room of the fire in Borgo was prepared as a music room for Julius’ successor, Leo X and the paintings in the room display eventful occasions in the lives of popes Leo III and Leo IV. The fire in the Borgo is full of references to classical antiquity, medieval architecture and themes used by contemporary artists. This painting celebrates the extinguishing of a wildfire that threatened to consume an area of Rome near the Basilica of St. Peter. Pope Leo IV was responsible for organising the stop to this fire. The coronation of Charlemagne shows Charlemagne, king of the Lombard’s being crowned as the holy emperor of Rome on Christmas Day 800AD. Inspired by the Italian victory at the naval battle against Muslim pirates in 849 at Ostia. The Oath of Leo III depict pope Leo taking an oath of Purgation swearing to God that the charges brought against him by the nephews of his predecessor were untrue. 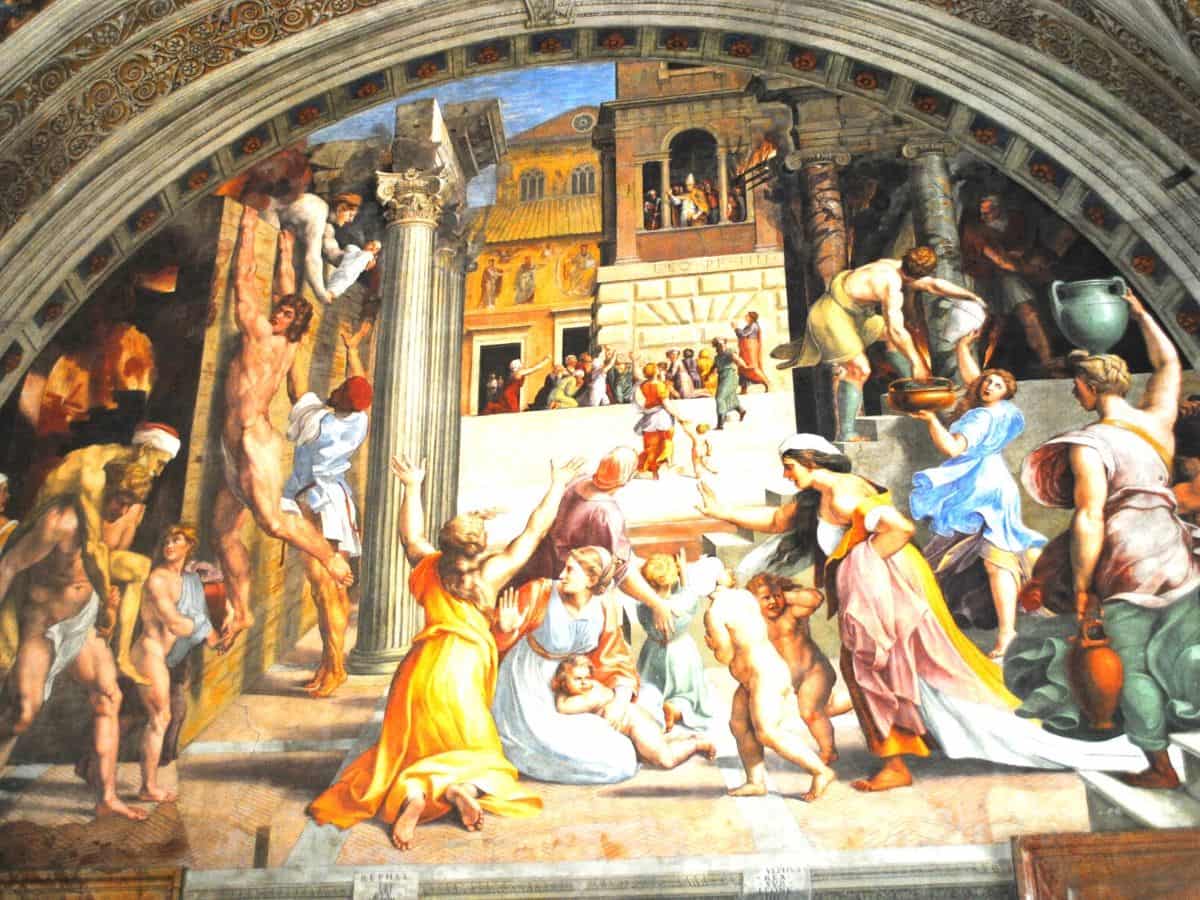 13 Crazy Facts about the Colosseum