In addition to the Colosseum and the Vatican, the Pantheon is another of Rome’s iconic landmarks – and well worth adding to your Rome tour itinerary. Located at Piazza della Rotonda, it is a popular sight with visitors taking a walking tour of Rome! But what makes this domed structure so unmissable? Check out these eight amazing facts to find out… 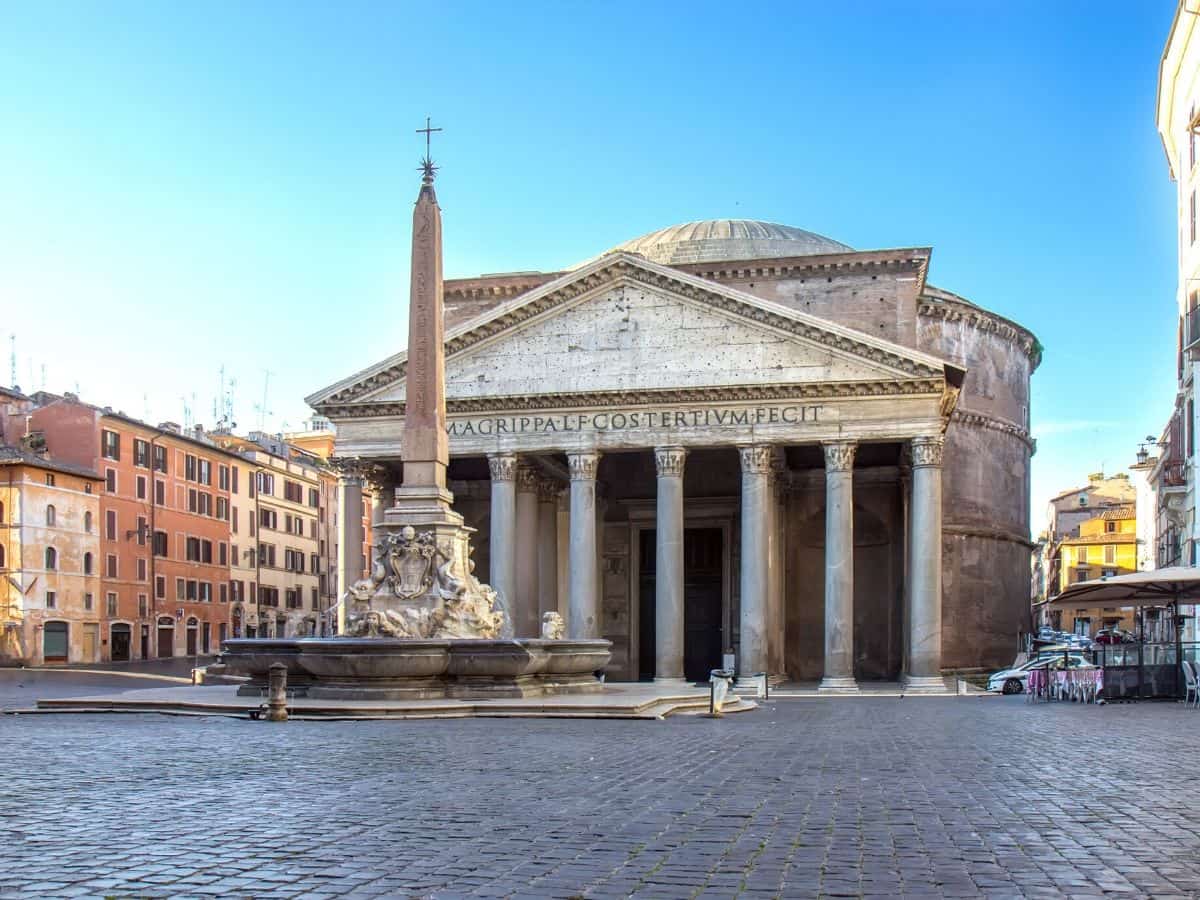 The Pantheon you can visit today on a tour of Rome is, in fact, the third Pantheon. The first two burnt down. In 80 AD, the original Pantheon (built in 31 AD) was destroyed - Emperor Domitian rebuilt it, but it caught fire again in 110 AD. It was rebuilt again; possibly by Hadrian, around 126-128 AD, but possibly by his predecessor Trajan shortly after it burnt down for a second time. A special type of concrete was used in its construction: a combination of limestone and volcanic ash which helped to form crystals that stop the spread of microscopic cracks. This material has supported the Pantheon structure through millennia, enabling it to stay standing today! 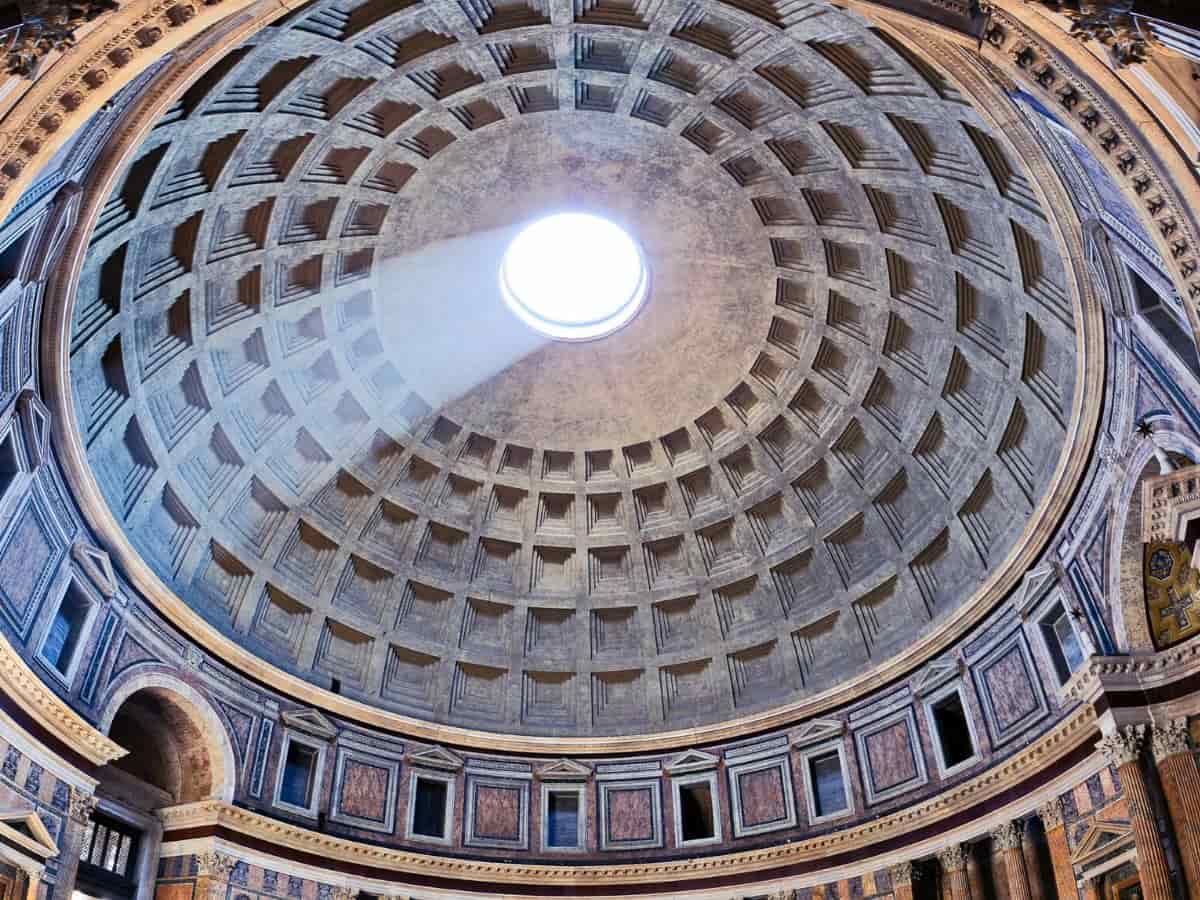 3. Royal burials at the Pantheon 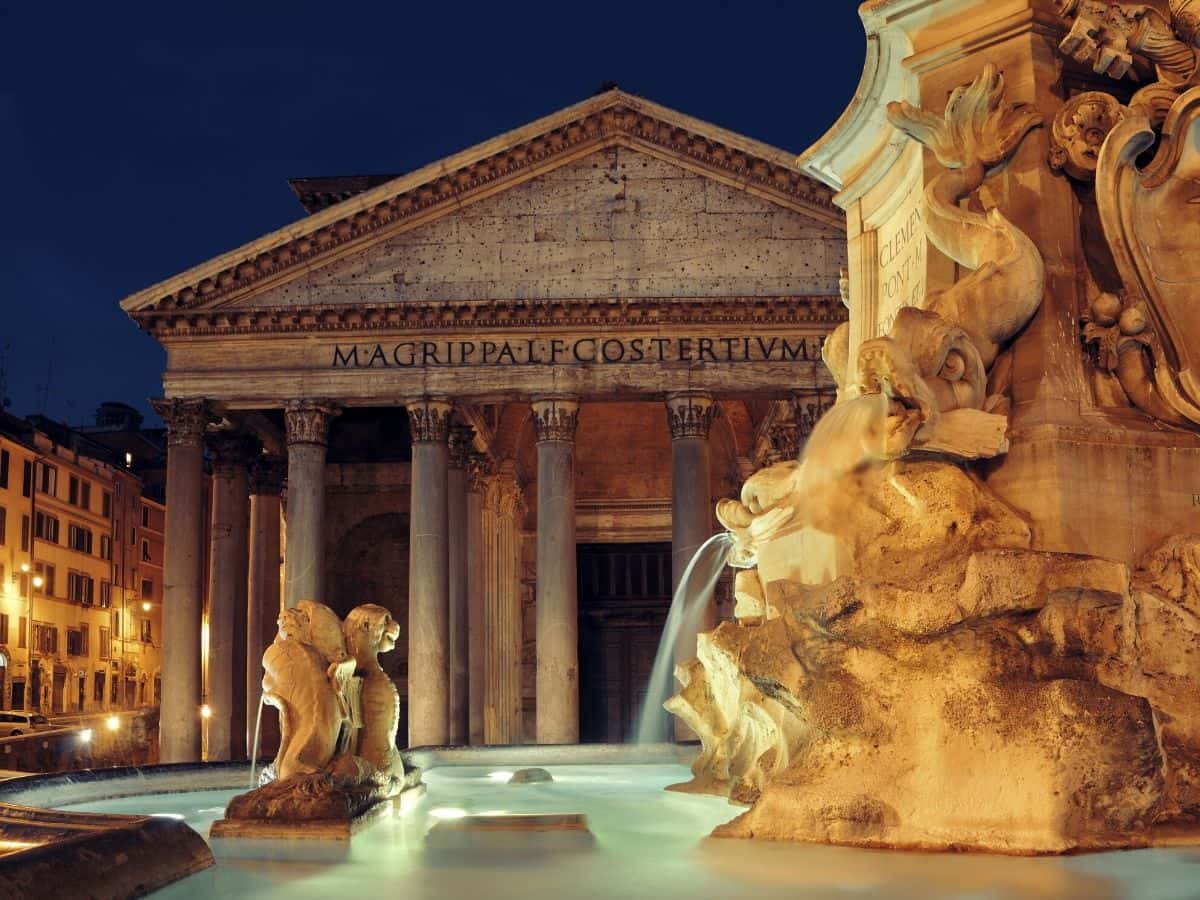 When visiting the Pantheon on one of our Rome tours, you will be amongst royalty: two of Italy’s kings are buried there. The country’s first two kings, Vittorio Emanuele II and his son, Umberto I, chose the church as their burial site. Umberto’s wife, Margherita, is buried there too. Other Italian kings are buried in locations such as Hautecombe Abbey, the Basilica of Superga and the San Bernardo Chapel.

4. Lighting up the church 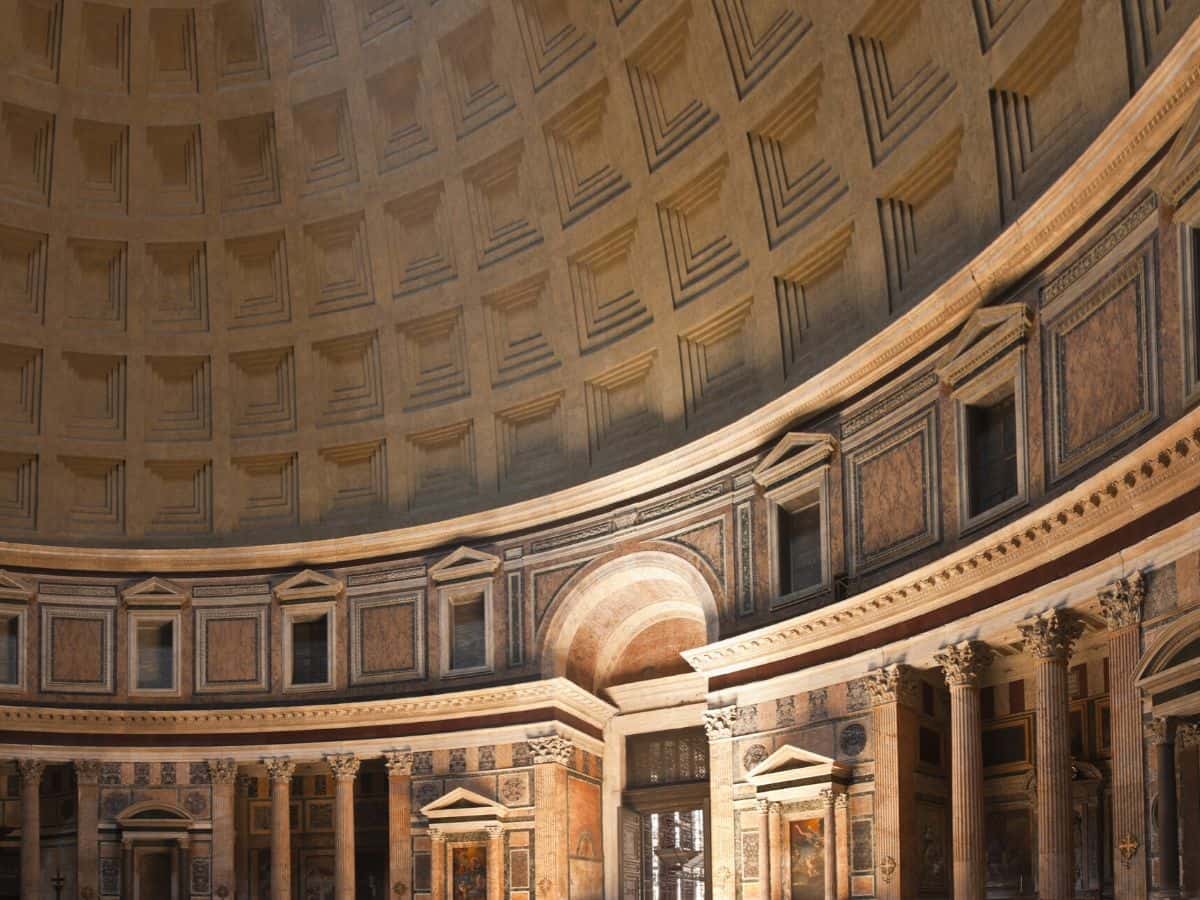 In the day time, light filters into the church through the oculus - the central opening in the dome. This is actually the only source of light in the Pantheon! It was built to illuminate the interior of the church but also to allow worshippers to contemplate the heavens whilst inside. The light from the oculus moves inside the Pantheon in a reverse sundial effect. As the oculus is always uncovered, when it rains in Rome it rains in the Pantheon too - but the convex floor and inbuilt drainage system help deal with this.

5. Corinthian columns of the Pantheon 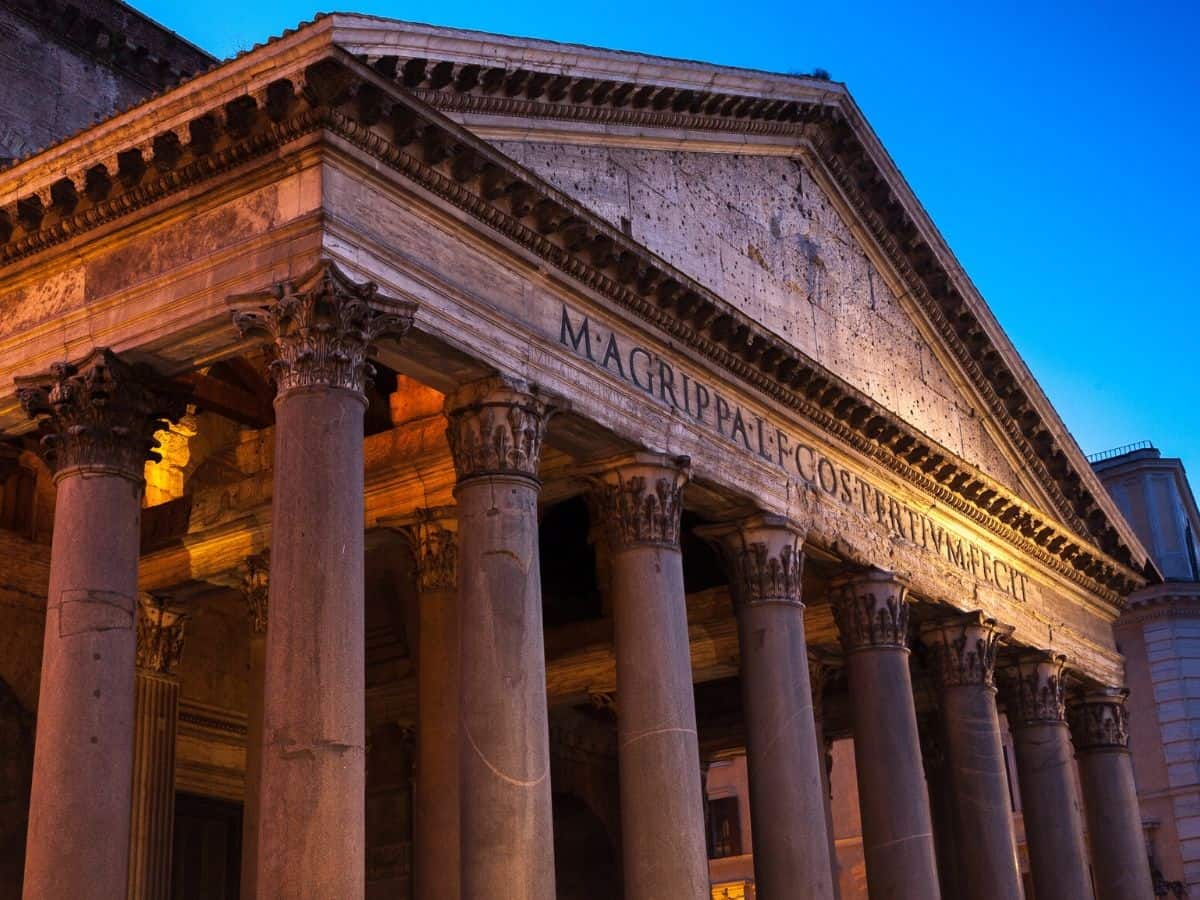 There are 16 columns supporting the portico. These weigh a massive 60 tons each; at 39 feet and 5 feet in diameter they are huge. Not only are the Corinthian columns ginormous, they also came all the way from Egypt. Dragged to the Nile from a quarry on wooden sleds, the columns were then floated (during the spring floods, when the water level was high) by barge. They were transferred to vessels on which the columns crossed the Mediterranean Sea, then put back onto barges to be pulled to Rome via the River Tiber. When you visit the Pantheon on one of our tours in Rome, you’ll be able to marvel at the journey those columns have taken.

6. Uses of the Pantheon 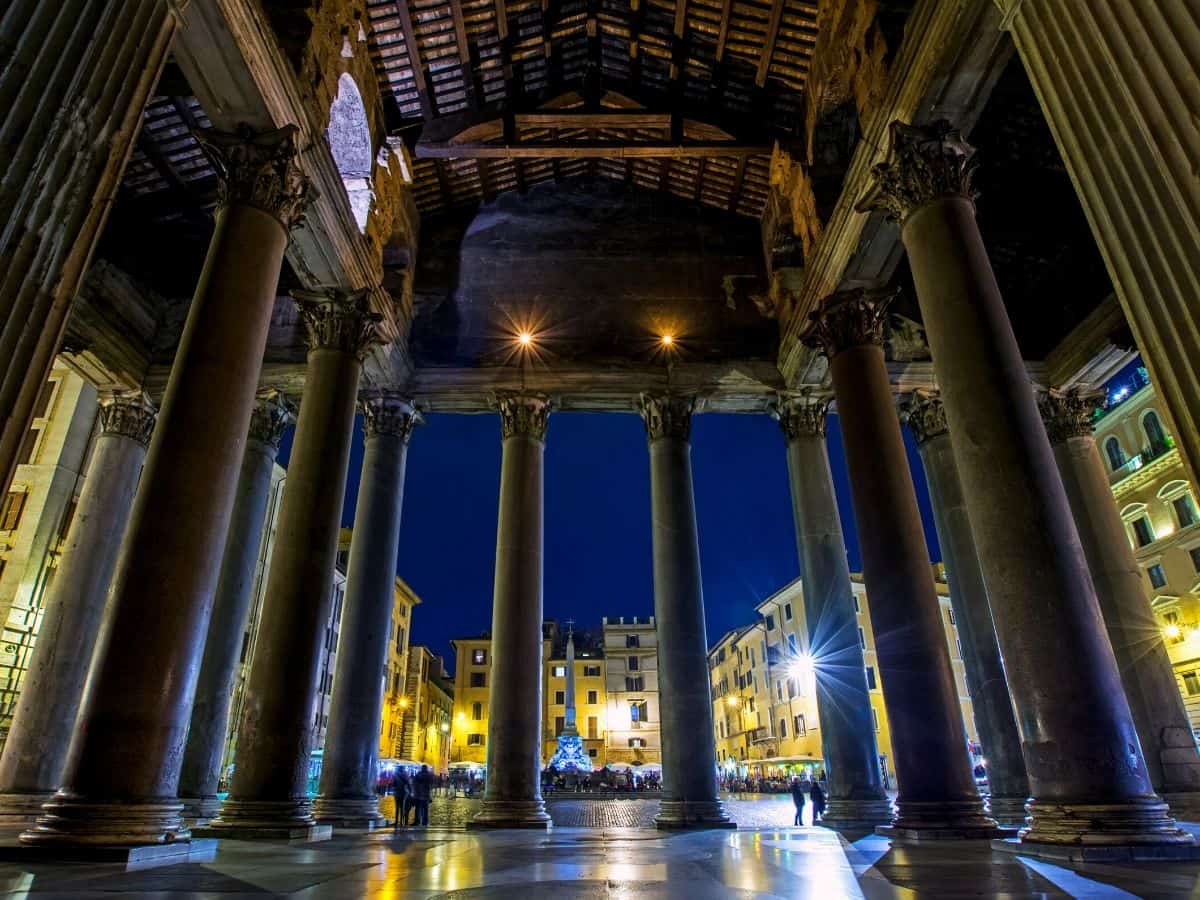 Currently, the Pantheon is a Christian church. You can actually attend Mass here on a Sunday in Rome. It is officially known as Basilica of St. Mary and the Martyrs. However, it was originally a Roman pagan temple. It being consecrated was actually its savior, as the papacy were keen to repair and maintain it - plus they had the means to do so! Because of this, the Pantheon is actually the most well-preserved ancient Roman building in the city. The building itself, and most of its decoration, are the same as they were in Roman times: visiting the Pantheon on a Rome tour is a bit like stepping back in time…

7. Catholic additions to the church 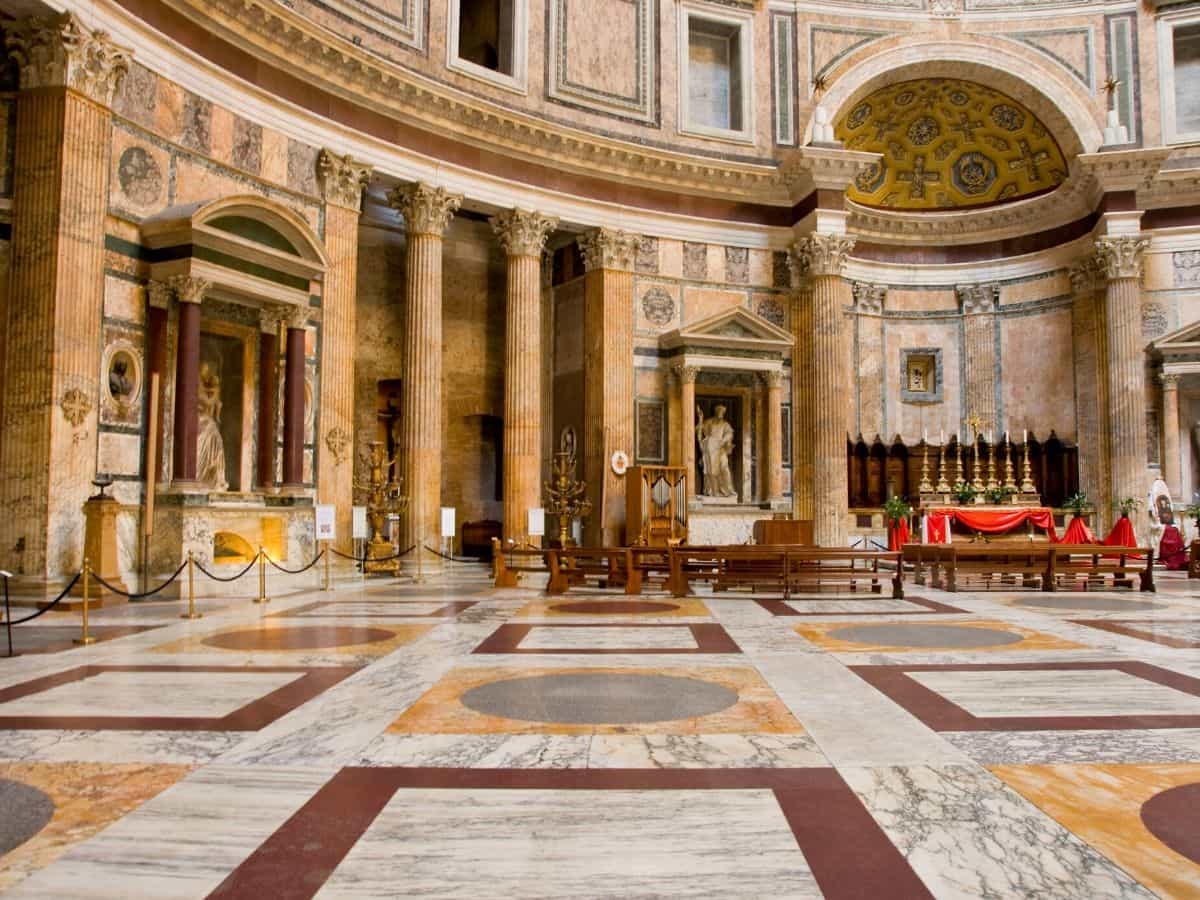 There are some parts of the Pantheon that exist due to its transformation into a church. For example, the high altars and the apses - which were commissioned by Pope Clement XI and designed by Alessandro Specchi - are Catholic additions. There is also a lot of catholic artwork inside the Pantheon. Madonna of the Girdle and St Nicholas of Bari, painted by an unknown artist in the 1680s, is an example of this. There are frescos, plaques and sculptures too. The Chapel of St Joseph in the Holy Land, the first chapel on the left, is the chapel of the Confraternity of the Virtuosi at the Pantheon. Formed in the 16th century by Desiderio da Segni, it attracted members such as Giovanni Mangone, Domenico Beccafumu, Cortona, Bernini and more.

8. The Pantheon in the movies 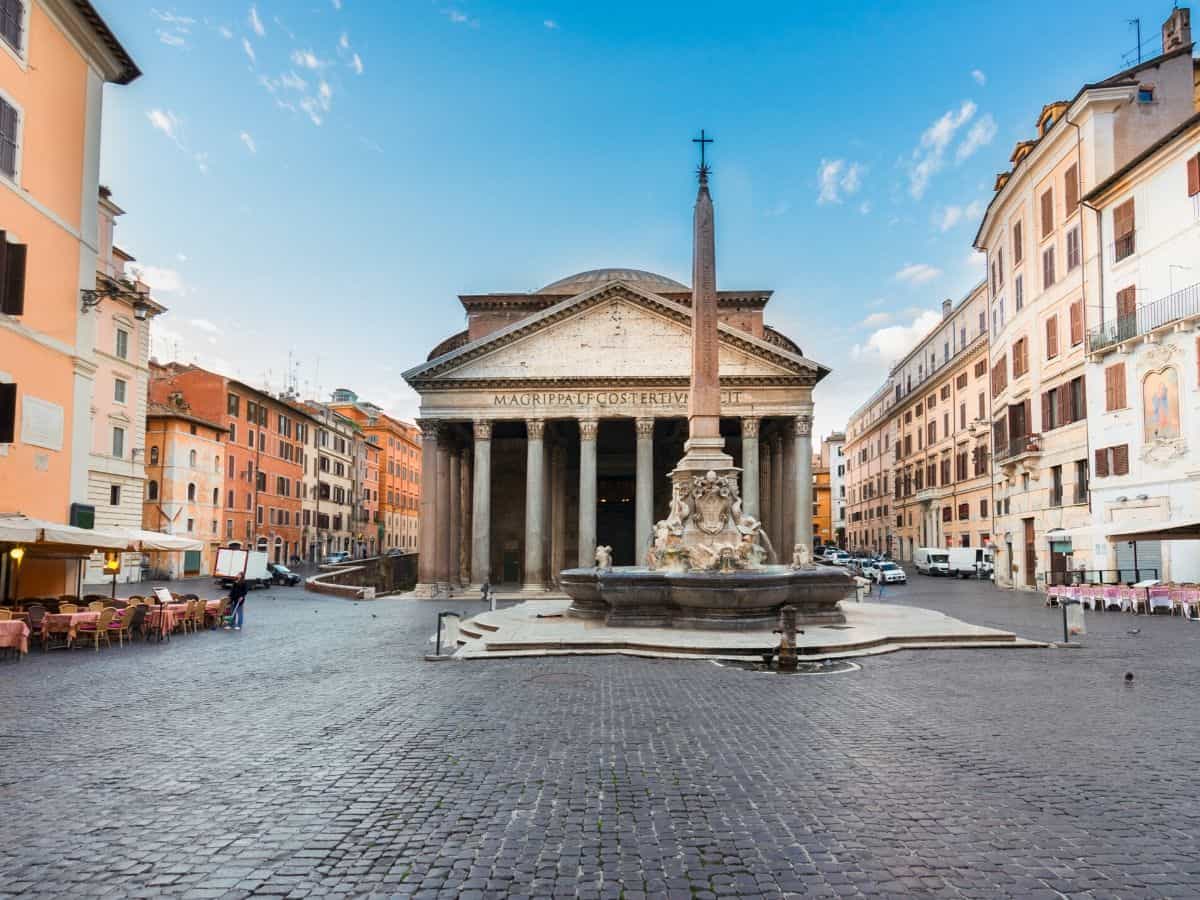 If you are a movie buff, you have likely spotted the Pantheon in film before now. In the movie adaptation of Dan Brown’s Angels and Demons, you will see Robert Langdon in Piazza della Rotonda - the square that is home to the Pantheon - with the church itself in full view. Langdon and Vittoria enter the Pantheon in search of the Altar of Science. The Pantheon is also seen in the movie Roman Holiday, which stars Audrey Hepburn and Gregory Peck. In the cafe scene, the cast are sat opposite the side of the Pantheon! You can actually go to this spot today; keep an eye out for Cremeria Monte Forte - they do great gelato, too.

The Pantheon is a fascinating piece of Roman history. Well-preserved and full of art, culture and stories, it is definitely worthy included on your tour of Rome! Whether its religion, architecture or something else that piques your interest, the Pantheon has it all.

A Guide to Rome’s Most Iconic Fountains 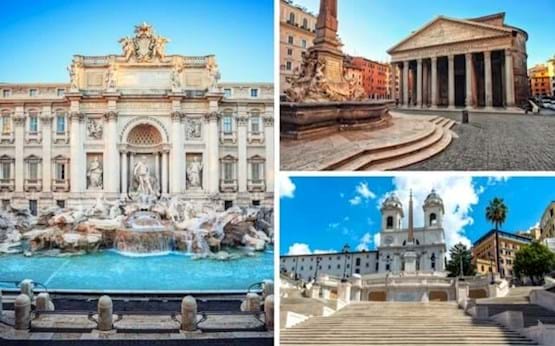 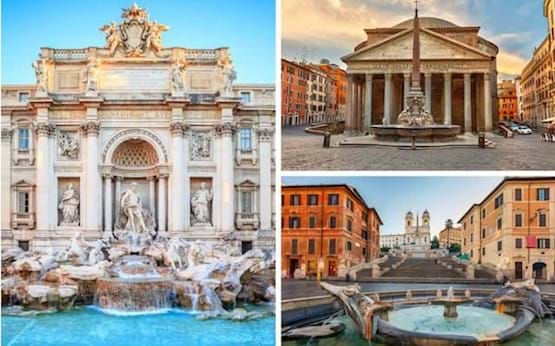