Explore the centuries-old Rome churches and burial sites of this ancient city. Our Crypts and Catacombs Tour brings you on a journey of some of the most iconic remains of that culture. See the underground catacombs where Christianity took root, the pagan cults that churches were built on and the shrines dedicated to the afterlife which give Rome the nickname- the Eternal City. You’ll visit three sites that explore Rome’s obsession with death.

Your Tour begins in Piazza Barberini where you will be greeted by your archaeologist guide at the fountain of Triton. Ironically, this was where they brought unidentified corpses to be identified until the 1800s.

Descend into the Catacombs of Rome

You’ll be seated in a private air-conditioned coach and driven to one of the many Christian Catacombs which are hidden around the city. Developed during the time when Christians were persecuted, the catacombs served as both a burial place due to the soft volcanic rock and a place of worship because it was not wise to broadcast your faith at the time. You’ll get to see the burial practices and iconography which developed over time until it became less a refuge and more the preferred resting place of popes.

After you leave the Catacombs, your bus will take you to the Basilica of San Martino ai Monti. Sitting on the edge of the Oppian Hill, which overlooks the Colosseum, this 4th-century basilica was founded by Pope Sylvester I - it was originally devoted to all martyrs, but is now named for St. Martin. Small and not as well known as many of the other churches across the city, the basilica is still a beautiful part of Roman history that is just waiting to be discovered. It is a wonderful part of this tour, complete with the chance to see the preserved relics of three different saints: Paulina, Sisinnius and Artemis.

Come Face to Face with the Bones of the Dead

The Church of Santa Maria della Concezioni dei Cappuccini is home to the museum of the Capuchins. They were a 16th-century offshoot of the Franciscans who promoted an ascetic way of life to contrast the extravagance of the popes at the time. The order grew and the museum offers a picture of the global impact of the order. It also contains interesting items such as instruments of flagellation and Caravaggio’s St. Francis painting. The building is also home to the famed Capuchin Crypts where the bodies of 4000 friars were rehoused in the 17th-century. Their bones were rearranged in an elaborate fashion to remind viewers that death cannot be escaped.

This tour offers you a different outlook on the Eternal City and is one of our most popular tours of Rome.

Please note that from August 6th, 2021, all public venues in Italy will require visitors above the age of 12 years old to present valid ID and certification proving that you have either:

The certification will only be accepted if issued by an approved issuing body of the following countries: EU, Schengen Zone, Canada, Israel, Japan, United Kingdom, and the USA, in either digital or paper format. They must be presented in Italian, English, French, or Spanish. For more information, please refer to the following website: https://www.dgc.gov.it/

On Sale
Skip the Line 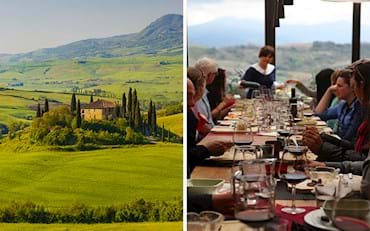